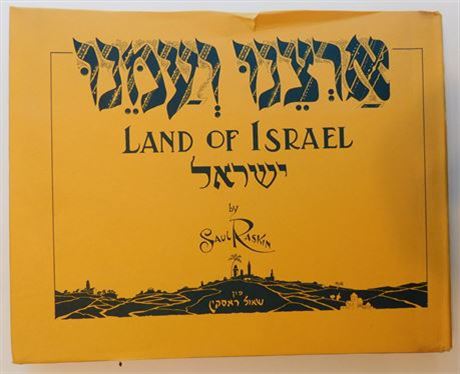 Signed dedication by author on fly.

Land of Israel, drawings and phots of Israel scenes, text in Hebrew, English & Yiddish, printed on heavy paper. English translation by Dr. B. Halper, the Yiddish translation is by Yehoash, illustrated by Saul Raskin.

Saul Raskin (1886–1966), artist. Born in Nogaisk, Russia, Raskin studied painting at different art schools in Europe and in 1904 went to the U.S. Raskin worked in many media and was known for his draftsmanlike attention to detail and his realistic approach. He painted mostly scenes of Jewish life and lore, especially Jewish life on the East Side of New York. His trips to Palestine yielded a series of paintings of Jewish life there, among them 20 lithographs on Jerusalem. Raskin also illustrated many Hebrew texts, e.g., Pirkei Avot (1940); the Haggadah (1941); Psalms (1942); the Siddur (1945); the Kabbalah, called Kabbalah in Word and Image (1952), and other works of Jewish context, such as Hebrew Rhapsody (1959).