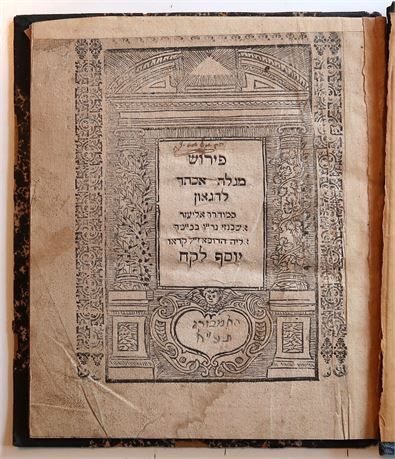 Commentary on Megillat Esther by R. Eliezer ben Elijah, the physician, Ashkenazi (1513-86). The author, a many faceted individual, was a talmudist, physician, and well-rounded scholar, who served as rabbi in a number of varied communities. Born in the Middle East to German-Jewish parents, R. Ashkenazi was a student of R. Joseph Taitazak. His first rabbinic position, from 1538-61, was in Fostat, Egypt. Forced to leave Fostat, R. Ashkenazi went to Famagusta, Cyprus, where he was rabbi for two years, and then to Venice. He left for Prague (1561) after a dispute with the Maharam of Padua, and after traveling as far as the Crimea, returned, via Famagusta, to Venice. R. Ashkenazi was next rabbi in Cremona, where he published Yosef Lekah. Shortly after he left to be rabbi of Posen, and, from 1584, was in Cracow. R. Ashkenazi experienced difficulties in Poland, disputing over his right to open a yeshiva in close proximity to an existing yeshiva, so that R. Joseph Solomon Delmedigo (1591-1655) wrote about him, "You have brought a vine from Egypt; you have cast out the nations, and planted it" (Psalms 80:9).
R. Ashkenazi was highly regarded by his contemporaries, corresponding with R. Joseph Caro, R. Joseph Ha-Kohen (Katz), R. Moses Isserles (Rema), and R. Solomon Luria (Maharsha1), several mentioning him in their responsa. R. Ashkenazi's responsum is included in Hatzaa al Odot ha-Get (Venice, 1566), concerning the Tamari-Venturozzo affair. R. Elijah of Pesaro, in Famagusta in 1563, praised R. Ashkenazi's scholarship, noting that he was fluent in twelve languages.
Yosef Lekah is dedicated to Don Joseph Nasi, Duke of Naxos, whom R. Ashkenazi, in the introduction, compares' to Joseph in Mizraim and Mordecai at the time of Ahasuerus. R. Ashkenazi, therefore, entitled this work Yosef Lekah. He also discusses the Jews of Turkey and the difficulties they have experienced. The work was completed in של"ו (336 = 1576), equaling "and that these days of Purim פורים (336) should not fail from among the Jews" (Esther 9:28).
R. Ashkenazi's most important work is Ma'aseh HaShem (Venice, 1583), on the historical occurrences in the Torah, with a commentary on the Passover Haggadah; selihot; and, not extant today, a supercommentary on the Ramban (Nachmanides) and annotations to R. Joseph Caro's Beit Yosef.