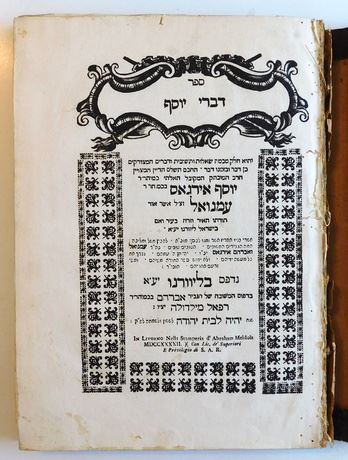 Author was leader in fight against Sabbetians.

Selection of R. Ergas' responsa published by his disciple R. Malachi Ha-Kohen. The publisher's introduction mentions several piyyutim written by R. Ergas. R. Joseph b. Emanuel Ergas (1685–1730), rabbi, kabbalist, and author of books on halakhic and kabbalistic matters. R. Ergas, who was of Marrano descent, was born in Leghorn. The headdress of a knight engraved on his tomb in Leghorn perhaps indicates descent from a noble Spanish family. R. Samuel of Fez was his teacher of halakhah and R. Benjamin ha-Kohen Vitale of Reggio taught him Kabbalah. As a young man, he traveled throughout Italy and preached public sermons, urging repentance. For a while he stayed in Pisa where he founded a yeshivah, Neveh Shalom. Later, he was appointed rabbi in Leghorn, and remained there until his death. R. Ergas became famous for his pamphlet Tokhahat Megullah, the polemic against the Shabbatean Nehemiah Hayon, and an addition to it called Ha-Zad Nahash (London, 1715). His kabbalistic works include: Shomer Emunim (Amsterdam, 1736), in which he explains the principles of the Kabbalah in the form of a dialogue between Shaltiel, who believes only in the revealed Torah, and Jehoiada, the victor in this argument, who believes also in the esoteric aspect of the Torah; Shomer Emunim includes Mevo Petahim, an appendix to the former, a selection from R. Luria's doctrine, and an introduction to the Kabbalah, and Minhat Yosef, an ethical-religious anthology and the rules for the study of the kabbalistic doctrines. R. Ergas was an enthusiastic believer in the importance and sanctity of the Kabbalah in general and of the Zohar in particular, despite his view that marginal annotations had been introduced into the proper text of the Zohar. He opposed philosophy, which he considered alien to Judaism and an invention of heretics. He opposed Maimonides' explanations of the stories of the Creation and the visions of Ezekiel in the spirit of Aristotle's natural philosophy. R. Ergas' style is distinguished by its clarity.