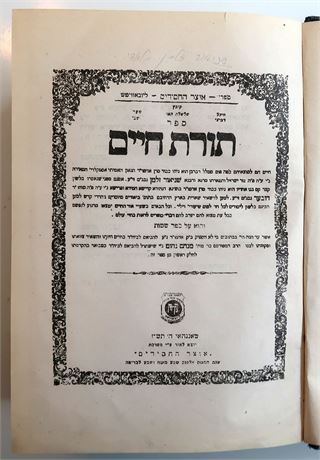 Hasidic commentary to Exodus by R. Shneur Zalman of Liady (1745–1813), the founder of Habad Hasidism as edited and expounded by his son, R. Dover. He was according to family traditions born in Liozna, Belorussia, on the 18th of Elul. After his marriage in 1760 he devoted himself to Torah study. Concluding that he knew "a little about learning, but nothing about prayer" in 1764 he decided to learn about Hasidism from R. Dov Baer the Maggid of Mezhirech, leader of the Hasidic movement. In Mezhirech he became one of the inner circle of the Maggid's pupils. Although he was one of the youngest pupils, the Maggid had a high opinion of him, and in 1770 delegated to him the task of composing a new and up-to-date Shulhan Arukh. R. Shneur Zalman worked on this book for many years, but published only small parts of it. About one-third was printed posthumously (the rest had been destroyed by fire) and is known as the "Shulhan Arukh of the Rav" (1814). Though not a hasidic work, it represents - as the Maggid had intended - a great halakhic achievement. It evidences R. Shneur Zalman's superb Hebrew style, his ability to provide lucid explanation, and profundity without complexity. It became an authoritative halakhic source among observant Jews.

The main period of Hebrew printing in Shanghai was during World War II and immediately after (1940–46), when remnants of Lithuanian yeshivot (Mir, Slobodka), as well as Lubavitch Hasidim, found refuge in Shanghai and printed – mostly photo-statically – rabbinic, ethical, and hasidic works in limited editions for their own use. 80 items are enumerated by Z. Harkavy (in Ha-Sefer, no. 9, 1961, 52–3; Hashlamot le-Mafte'ah ha-Maftehot (by S. Shunami, 1966), 3–4), several more have come to light since. Hebrew newspapers were printed in Shanghai as early as 1904.