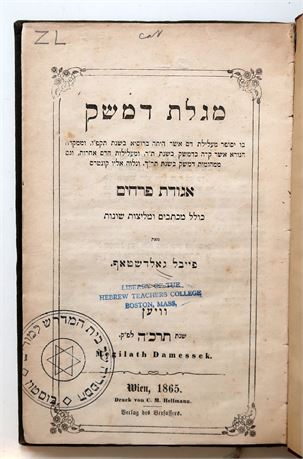 Details of several blood libel affairs in Russia and Damascus. In the 19th century Russia has been the principal perpetrator of the blood libel. The first blood-libel case in Russia occurred in the vicinity of Senno, south of Vitebsk, on the eve of Passover 1799, when the body of a woman was found near a Jewish tavern: four Jews were arrested on the ground of the "popular belief that the Jews require Christian blood." Apostates supplied the court with extracts from a distorted translation of the Shulhan Arukh and Shevet Yehudah. The accused were released through lack of evidence. Official Russian circles were divided in their views on the libel. A number of inquiries into the charges were instituted, while the views of the czars themselves fluctuated; the emperors and popes of the Middle Ages can be pointed to as models of enlightenment in comparison with the rulers of czarist Russia.<p>Between 1805 and 1816 various cases of blood libel occurred in places within the Pale of Settlement, and the investigations always ended by exposing the lie on which they were based. In an attempt to stop their dissemination the minister of ecclesiastic affairs, A. Golitsyn, sent a circular to the heads of the guberniyas (provinces) throughout Russia on March 6, 1817, to this effect. Basing his instruction on the fact that both the Polish monarchs and the popes have invariably invalidated the libels, and that they had been frequently refuted by judicial inquiries, he stated in his circular that the czar directed "that henceforward the Jews shall not be charged with murdering Christian children, without evidence, and through prejudice alone that they allegedly require Christian blood." Nevertheless Alexander I (1801–25) gave instructions to revive the inquiry in the case of the murder of a Christian child in Velizh (near Vitebsk) where the assassins had not been found and local Jewish notables had been blamed for the crime. The trial lasted for about ten years. Although the Jews were finally exonerated, Nicholas I later refused to endorse the 1817 circular, giving as a reason that he considered that "there are among the Jews savage fanatics or sects requiring Christian blood for their ritual, and especially since to our sorrow such fearful and astonishing groups also exist among us Christians." Other blood libels occurred in Telsiai (Telz) in the guberniya (province) of Kovno, in 1827, and Zaslav (Izyaslav), in the government of Volhynia, in 1830. <p>The blood libel, in the various forms it assumed and the tales with which it was associated, is one of the most terrible expressions of the combination of human cruelty and credulity. No psychological or sociological research can convey the depths to which the numerous intentional instigators of such libels, and the more numerous propagators of this phantasmagoria, sank. It resulted in the torture, murder, and expulsion, of countless Jews, and the misery of insults. The Jew had only to refer to himself, his upbringing, laws, way of life, and attitude to other people and to cruelty, to perceive the falsity and baselessness of these allegations.

Featured in the book is Sir Moses Montefiore (1784–1885) indisputably the most famous Anglo-Jew of the 19th century. Montefiore was born in Leghorn while his parents were on a visit from London, where he was brought up, being taught elementary Hebrew by his maternal uncle Moses Mocatta. First apprenticed to a firm of wholesale grocers and tea merchants, he left to become one of the 12 "Jew brokers" in the City of London. Contrary to accepted opinion, he was apparently somewhat lax in religious observance in earlier life; but from 1827, after his first visit to Erez Israel, until the end of his life, he was a strictly observant Jew. Montefiore maintained his own synagogue on his estate at Ramsgate from 1833 and in later years traveled with his own shohet. His determined opposition checked the growth of the Reform movement in England. He paid seven visits to Erez Israel, the last in 1874. In 1838 his scheme for acquiring land to enable Jews in Erez Israel to become self-supporting through agriculture was frustrated when Mehemet Ali, viceroy of Egypt, who had shown sympathy for the idea, was forced by the great powers to give up his conquests from the Turks. He later attempted to bring industry to the country, introducing a printing press and a textile factory, and inspired the founding of several agricultural colonies. The Yemin Moshe quarter outside the Old City of Jerusalem was due to his endeavors and named after him. In 1855, by the will of Judah Touro, the U.S. philanthropist, he was appointed to administer a bequest of $50,000 for Jews of the Holy Land.

Montefiore was sheriff of London in 1837–38 and was knighted by Queen Victoria on her first visit to the City. He received a baronetcy in 1846 in recognition of his humanitarian efforts on behalf of his fellow Jews. Although president of the Board of Deputies of British Jews from 1835 to 1874 (with only one brief interruption), he did not, after the early years, play a prominent part in the emancipation struggle but devoted himself to helping oppressed Jewries overseas. He has been described as the last of the shtadlanim who by their personal standing with their governments were able to further the cause of Jews elsewhere. He was active as such from the time of the Damascus Affair in 1840. In 1846, he visited Russia to persuade the authorities to alleviate persecution of the Jewish population, and went to Morocco in 1863 and Rumania in 1867 for the same purpose. His intervention in the Mortara Case in 1855, however, proved a failure. Some of his achievements appear in retrospect as transitory. Although in 1872, after representing the Board of Deputies at the bicentenary celebrations of Peter the Great, he reported that a new age had dawned for the Jews of Russia, persecution was renewed in 1881. His 100th birthday was celebrated as a public holiday by Jewish communities the world over.

The Damascus Affair, a notorious blood libel in 1840 in which Christian anti-Semitism and popular Muslim anti-Jewish feelings came to a head and were aggravated by the political struggle of the European powers for influence in the Middle East. On February 5, 1840, the Capuchin friar Thomas, an Italian who had long resided in Damascus, disappeared together with his Muslim servant Ibrahim Amara. The monk had been involved in shady business, and the two men were probably murdered by tradesmen with whom Thomas had quarreled. Nonetheless, the Capuchins immediately circulated the news that the Jews had murdered both men in order to use their blood for the Passover. As Catholics in Syria were officially under French protection, the investigation should have been conducted, according to local law, by the French consul. But the latter, Ratti-Menton, allied himself with the accusers, and supervised the investigation jointly with the governor-general Sherif Padia; it was conducted in the most barbarous fashion. A barber, Solomon Negrin, was arbitrarily arrested and tortured until a "confession" was extorted from him, according to which the monk had been killed in the house of David Harari by seven Jews. The men whom he named were subsequently arrested; two of them died under torture, one of them converted to Islam in order to be spared, and the others were made to "confess." A Muslim servant in the service of David Harari related under duress that Ibrahim Amara was killed in the house of Meir Farhi, in the presence of the latter and other Jewish notables. Most of those mentioned were arrested, but one of them, Isaac Levi Picciotto, was an Austrian citizen and thus under the protection of the Austrian consul; this eventually led to the intervention of Austria, England, and the United States in the affair. When some bones were found in a sewer in the Jewish quarter, the accusers proclaimed that they were those of Thomas, and buried them accordingly. An inscription on the tombstone stated that it was the grave of a saint tortured by the Jews. Then more bones were found, alleged to be those of Ibrahim Amara. But a well-known physician in Damascus, Dr. Lograso, refused to certify that they were human bones, and requested that they be sent to a European university for examination. This, however, met with the opposition of the French consul. The authorities then announced that on the strength of the confessions of the accused and the remains found of the victims, the guilt of the Jews in the double murder was proved beyond doubt. They also seized 63 Jewish children so as to extort the hiding place of the victims' blood from their mothers.