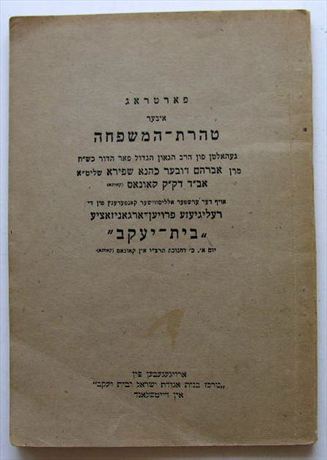 Work in Yiddish and Hebrew, issued for Holocaust survivors in the DP camps by the Agudat Israel and Bet Jacob Organization in Germany. The work was originally printed in Kaunas (Kovno) in 1936 for the first religious Women's conference. Taharot haMishpaha deals with the laws of Niddah, during which time according to Jewish law, a woman is forbidden to maintain sexual relations with her husband during and for some time both before and after her menses. The laws relating to the menstruous woman comprise some of the most fundamental principles of the halakhic system, while a scrupulous observance of their minutiae has been one of the distinguishing signs of an exemplary traditional Jewish family life. Among the most difficult and intricate in the entire range of the halakhah, these laws are elucidated in a lengthy and detailed tractate of the same name devoted to the subject. However, on a practical basis, more concise and less discursive works are necessary for observance by woman of these laws.