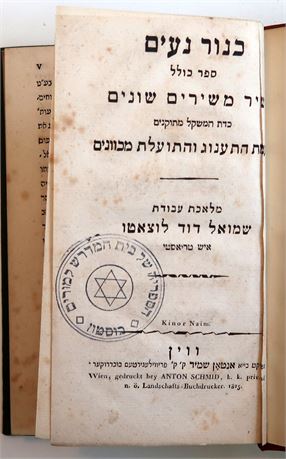 Poetry by R. Samuel David Luzzatto (often referred to by the acronym of SHaDaL or SHeDaL; 1800–1865), Italian scholar, philosopher, Bible commentator, and translator. His father, Hezekiah, was an artisan at Trieste and a scholarly Jew who could claim descent from a long line of scholars. He wrote his first Hebrew poem at the age of nine. His mother died when he was 13 and his father's pecuniary status declined seriously making it necessary for the young Luzzatto to assist his father in his work. His own wife died after a long illness, and he eventually married her sister. He survived two of his children - one Philoxenus (or Filosseno), had been a young man of especially great promise. Samuel David's translation of the Ashkenazi prayer book into Italian appeared in 1821/22, and that of the Italian rite in 1829. He established a regular correspondence with the Jewish scholar, Isaac Samuel Reggio, and through the efforts of the latter, Luzzatto was appointed professor of the newly established rabbinical college of Padua in 1829. There he spent the rest of his life teaching Bible, philology, philosophy, and Jewish history. His versatility and the scope of his learning are best seen in the mass of letters written to all the outstanding Jewish savants of the day - to Geiger, Zunz, Rapoport, Steinschneider and others. Almost 700 of these letters were published and many run into several pages; some are in themselves dissertations. He wrote a Hebrew commentary on the Pentateuch (5 vols., with Italian translation, 1871–76; new ed. by P. Schlesinger, 1965) and the Haftarot, on the Book of Isaiah (together with a translation into Italian, 1845–97; new ed. by P. Schlesinger and completed by A. M. Hovev, 1970), on Jeremiah, Ezekiel, Proverbs, and Job and a long dissertation in Hebrew on Ecclesiastes (1876; repr. 1969). It is in this type of work that his attitude to Judaism is revealed. He was a traditionalist and had a great veneration for Rashi in particular. His antagonism toward R. Abraham ibn Ezra is asserted boldly in his letters and Bible commentaries. He maintained that his own dislike for Ibn Ezra did not stem so much from the latter's departure from tradition as from his insincerity (see: Letters nos. 83, 242, 272, 275 and 543). Luzzatto had his grievances against Maimonides too, but in the case of the latter his language is more restrained. Luzzatto, as he himself wrote, divided seekers of truth into two groups - those who follow Rashi and R. Samuel b. Meir and those who are the disciples of Maimonides and Ibn Ezra (Letters nos. 272 and 275). His own commentary on the Pentateuch is not fundamentalist, and whereas he himself did not take the first chapters of Genesis literally, he criticizes those who treat them as an allegory (Letters no. 83). He believed them to be meant as model lessons from which we are to derive moral and ethical values. In his writings, he readily quotes the views of his pupils, mentioning their names when so doing.
An autobiography of Luzzatto appeared in 1882 (Hebrew in Ha-Maggid 1858–62; German 1882), and memorial volumes in Italian (Commemorazione..., 1901) and in German (Luzzatto-Gedenkbuch, 1900). There are a number of collections of his articles such as Beit ha-Ozar (3 vols., 1847, 1888, 1889) and Peninei Shadal (1888); but much of his scholarly work remains scattered over various periodicals, pamphlets, works of other authors, and much has never been published. An edition of all his Hebrew writings was begun in 1913 (Ketavim Ivriyyim) but was not completed.