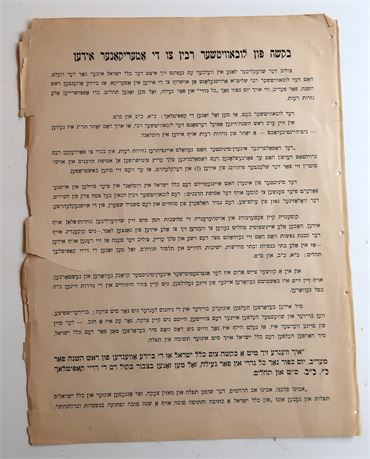 Holocaust - The Rebbe appeals to all Jews to recite several chapters of Psalms on Rosh Hashana and Yom Kippur Eves as to redeem Jewry from further destruction by their persecutors.

Appeal by by R. Joseph Isaac Schneersohn (1880-1950), sixth rebbe in the Habad dynasty, assumed the leadership of Habad during the period of the civil war in Russia which followed the 1917 Revolution. An outstanding organizer, he began to reconstruct Jewish life and became the foremost religious leader of Russian Jewry. He fought courageously to resume religious activities under the Communist regime. Under his leadership the Habad movement became the core of a strong Jewish spiritual revival. Although his activities were at first permitted, he was arrested in 1927, and only after powerful pressure within Russia and abroad was freed on 12th–13th of Tammuz of that year, days commemorated by Habad Hasidim as a holiday of deliverance. He left Russia and went to Riga (Latvia), where he organized new Habad centers, and founded Habad organizations throughout the world. In 1934 he settled in Poland and organized a network of Habad yeshivot. After the outbreak of World War II and the German occupation of Poland he was rescued, and went to the United States. With undaunted energy he stimulated, from his headquarters in Brooklyn, a renaissance of Orthodoxy in the United States. R. Joseph Isaac founded modern organizations of Habad, a network of schools and yeshivot, newspapers for adults and children, a flourishing publishing house, and numerous welfare organizations. In 1948 he founded Kefar Habad in Israel. He wrote a notable history of Habad, and published many of his sermons and talks. His wisdom and erudite mind made the Lubavitcher movement the high profile hasidim, which they still retain.