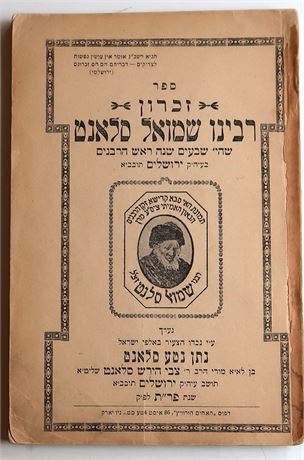 Biography of  R. Samuel Salant (1816–1909) chief rabbi of Jerusalem and one of the foremost 19th-century rabbis in Jerusalem. Born near Bialystok (Russia, now Poland), R. Salant studied at yeshivot in Vilna, Salant, and Volozhin. He set out for Erez Israel in 1840, but was delayed for a few months in Constantinople, where he first met Sir Moses Montefiore, with whom he established a firm friendship. In 1841 he reached Jerusalem, where the heads of the kolel Lita appointed him rabbi of the Ashkenazi community. A leading figure in Jerusalem, he became Ashkenazi chief rabbi in 1878, holding the position until his death. Salant strove to develop the institutions of the Ashkenazi community, which increased from 500 members at his arrival to 30,000 at the time of his death, and succeeded in obtaining for the Ashkenazim the official status previously enjoyed only by the Sephardi community. Between 1848 and 1851 and in 1860 he traveled to several European countries to collect money for religious institutions in Jerusalem. Salant was a founder of the Ez Hayyim Talmud Torah and Yeshivah, the Bikkur Holim Hospital, and the Keneset Israel General Committee, which united all the kolelim under a single administration. He also encouraged the establishment of the Jewish quarters, such as Me'ah She'arim, Keneset Israel, and others, outside the Old City walls. He tried to lessen the friction between the veteran settlement and the new yishuv, combated the activities of the mission schools and ameliorated the relations between the Ashkenazi and Sephardi communities. Salant lived an exemplary life of the utmost frugality. He devoted himself without stint to the needs of his community. He was an outstanding posek, distinguishing himself by his power of decision, and showed a definite tendency toward leniency in his decisions.