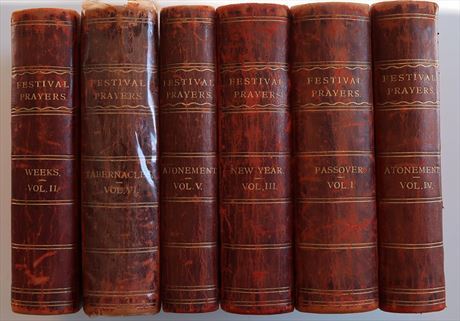 Title: The Festival Prayers, according to the custom of the German and Polish Jews ... with a new English translation by... D. A. de Sola...

David de Aaron de Sola, Minister and author; born at Amsterdam 1796; died at Shadwell, near London, 1860; son of Aaron de Sola (No. 21). When but eleven years of age he entered as a student the bet ha-midrash of his native city, and after a course of nine years received his rabbinical diploma. In 1818 he was elected one of the ministers of the Bevis Marks Congregation, London. De Sola's addresses before the Society for the Cultivation of Hebrew Literature led the Mahamad to appoint him to deliver discourses in the vernacular, and on March 26, 1831, he preached the first sermon in English ever heard within the walls of Bevis Marks Synagogue. His discourses were subsequently published by the Mahamad. In 1829 he issued his first work, "The Blessings"; and in 1836 he published his "Translation of the Forms of Prayer According to the Custom of the Spanish and Portuguese Jews," in six volumes, of which a second edition was issued in 1852. This translation formed the basis for several subsequent ones.

In 1837 De Sola published "The Proper Names in Scripture"; about the same time he wrote "Moses the Prophet, Moses Maimonides, and Moses Mendelssohn"; and in 1838 "Notes on Basnage and Milman's History of the Jews." In 1839, collaborating with M. J. Raphall, he translated eighteen treatises of the Mishnah. The work had a strange fate, for, the manuscript having reached the hands of a member of the Burton Street Synagogue, it was published in 1812, without the permission of the authors, before it had been revised or corrected for the press, and with an anonymous preface expressing views entirely opposed to those of De Sola and Raphall.

In 1840 De Sola, conjointly with M. J. Raphall, began the publication of an English translation of the Scriptures, together with a commentary. Only the first volume, "Genesis," was published, in 1844.

De Sola was instrumental in organizing the Association for the Promotion of Jewish Literature and other societies of a similar character. In 1857 he published "The Ancient Melodies of the Spanish and Portuguese Jews," including a historical account of the poets, poetry, and melodies of the Sephardic liturgy. In the notation of the melodies he was assisted by Emanuel Aguilar, the composer. In 1860 De Sola translated into English, in four volumes, the festival prayers according to the custom of the German and Polish Jews.

Besides his works in English, De Sola wrote in Hebrew, German, and Dutch. He contributed frequently between 1836 and 1845 to the "Allgemeine Zeitung des Judenthums" and to "Der Orient," and published in German "A Biography of Ephraim Luzzato" and a "Biography of Distinguished Israelites in England." His chief work in Dutch was his "Biography of Isaac Samuel Reggio," published in 1855 and afterward translated into English.

David de Sola was married in 1819 to Rica Meldola, the eldest daughter of Haham Raphael Meldola, by whom he had six sons and nine daughters. One daughter, Jael, married Solomon Belais, son of Rabbi Abraham Belais, at one time treasurer to the Bey of Tunis, and another, Eliza, married Rev. Abraham Pereira Mendes, and was the mother of Dr. Frederick de Sola Mendes and of Dr. Henry Pereira Mendes. Of the other daughters five married in London.