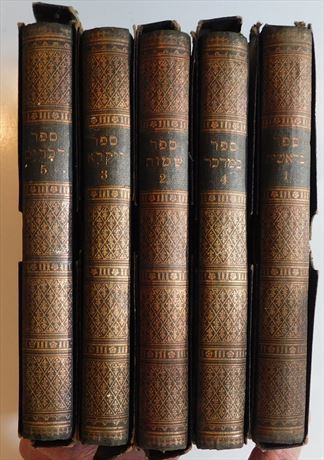 Hebrew Pentateuch with English tranlation by Dr. A. Benisch.

Abraham Benisch (1814–1878) was an author, scholar, and precursor of Zionism. Benisch was born in Drossau, Bohemia. As a student of medicine at the University of Prague he joined Moritz Steinschneider, who founded a student organization for the purpose of "reestablishing Jewish independence in Erez Israel." Continuing his studies in Vienna in 1838, Benisch, and Albert Loewy, established a secret society, Die Einheit, whose purpose was to initiate organized Jewish immigration to Erez Israel. With this aim in mind he talked to Adolphe Crémieux and, in 1841, proceeded to London with a letter of recommendation from the House of Rothschild to influential Jewish circles. Receiving no tangible support, Benisch nevertheless continued to promote his views in the periodical The Voice of Jacob (1841–48), and in 1853 started the Hebrew Observer as a rival to the then 12-year-old Jewish Chronicle. In 1854 the paper was merged with the Jewish Chronicle, which for the next 13 years, and again from 1875 to 1878, was edited by Benisch, under the title Jewish Chronicle and Hebrew Observer. During these years Benisch utilized every opportunity, including the Damascus Affair and the Crimean War, to raise the question of Jewish revival in Erez Israel. He collaborated with Charles Netter in founding the Mikveh Israel agricultural school. He was one of the founders and first directors of the Anglo-Jewish Association and carried on an unceasing campaign for the rights of the Jews in Russia and the Balkan countries. In his articles before and during the Congress of Berlin (1878), Benisch stressed the importance of Jewish settlement of Erez Israel as integral to the solution of Near Eastern problems. Benisch published a Hebrew commentary on the Book of Ezekiel (1836), and wrote Two Lectures on the Life and Writings of Maimonides (1847). He translated the Bible into English (1851), and in the same year also translated into English the Travels of Pethahiah b. Jacob of Regensburg. He wrote a Hebrew grammar and a scripture manual in 1852, entitled Bikkurei ha-Limmud, and An Essay on Bishop Colenso's Criticism of the Pentateuch and Joshua (1863). A collection of his lectures entitled Judaism Surveyed appeared in 1874.