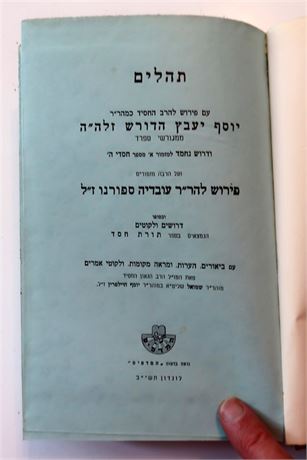 Very attractive bibliophile edition of Psalms on blue paper with the detailed commentary of R. Joseph ben Hayyim Jabez. First printed in Salonika in 1571 this edition of his commentary is published on colored paper There are approbations from R. Joseph Sternbach, R. Meir Shapira, R. Samuel  ben Joseph Heilperin, Next is the introduction from R. Jabez’s Ḥasdei ha-Shem which is also appropriate to this work and then the text of Psalms, the text of Psalms in square vocalized letters at the top of the page and below it in square letters R. Jabez’s commentary. At the end of the volume are derashot ve-likutim from R. Jabez. The pages in this pristine copy are still uncut.

R. Joseph ben Hayyim Jabez (d. 1507), Hebrew homilist and exegete. From the prefaces to some of his works, it seems that after the expulsion from Spain in 1492, Jabez traveled to Lisbon, to Sicily, and then to northern Italy, after a brief stay in Naples, arriving in 1493 or 1494 in Mantua, one of the largest and most cultured Italian-Jewish communities. There he remained and was honorably accepted as part of that community, apparently as its official preacher. Both in his travels and in Mantua, he preached about the meaning of the catastrophe that had befallen Spanish Jewry. Among his published works, most of which were written after the expulsion, are four theological-homiletic compositions, which treat three main questions: Ḥasdei ha-Shem (Constantinople, 1533), on the Diaspora and messianic expectations; Or ha-Ḥayyim (appended to Ma'amar ha-Aḥdut, Ferrara, 1554; separately Shklov, 1796), on Jewish philosophy and its influence upon the fate of Spanish Jewry; and two short treatises (published with the first edition of Or ha-Ḥayyim), "Ma'amar ha-Aḥdut" (Ferrara, 1554) and "Yesod ha-Emunah" (appended to Ma'amar ha-Ahdut), on the ikkarim, the "dogmas" of Judaism. In asserting that philosophical rationalism was to blame for the choice by so many Spanish Jews of conversion rather than exile and suffering, he expressed the feeling of many of his contemporaries. Jabez – who hated philosophy – maintained that the philosophical intellectuals did not consider the observance of the commandments as the most important aspect of religious life, and therefore were not prepared to sacrifice themselves for that observance. He did not attack Maimonides directly, but accused Maimonides' pupils and followers of distorting his views and thus of bringing the religious catastrophe upon Spanish Jewry. Similarly, in his treatment of the question of the ikkarim, Jabez opposed all his predecessors who attempted to formulate a rational basis for the dogmas of Judaism, claiming that rational proof of a dogma leaves no room for religious belief. Accordingly, he did not include the existence and unity of God – which, he maintained, can be rationally proved – among the three main dogmas he proposed, namely, the creation of the world, divine providence, and the belief in redemption and the coming of the Messiah. Although polemics against many contemporaries comprise much of his writing, Ḥasdei ha-Shem contains elements of hope in its description of the exile as necessary for the expiation of the people's sins, and the great Jewish sufferings in his own day as indicative of the approaching redemption. Besides these theological works, all printed in several later editions as well, Jabez' writings include a commentary on the tractate Avot (Constantinople, 1533), one on Psalms (Salonika, 1571), and many other works still in manuscript.