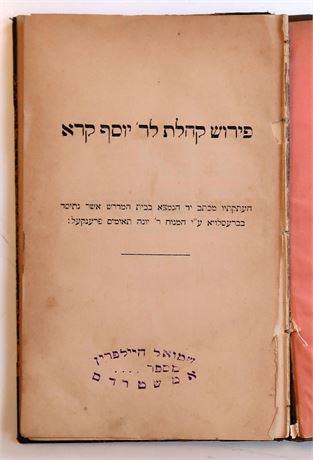 Joseph ben Simeon Kara (c. 1065 – c. 1135) also known as Mahari Kara, was a French Bible exegete who was born and lived in Troyes. His uncle and teacher was Menachem ben Helbo, whom Ḳara often cites in his commentaries, these quotations being almost the only source of knowledge concerning Menahem's exegesis.

R. Kara frequented Rashi's house; it is even possible that he was Rashi's pupil. They each quote from the other. In Rashi's house R Kara also made the acquaintance of R. Samuel ben Meir. They likewise quote each other. He was among the first French exegetes and the forerunner of the French school of exegetes later to come. They were all to some extent influenced by his works, most notably among them, the Rashbam. Rashi too was influenced by R. Yosef who repeated his teacher's comments to him and incorporated several of them in his commentary. He was a prolific exegetical writer. When he copied Rashi's commentary on the Pentateuch he added numerous glosses and remarks in order to supplement and revise it; and these glosses were inserted by the scribes in the text of Rashi.