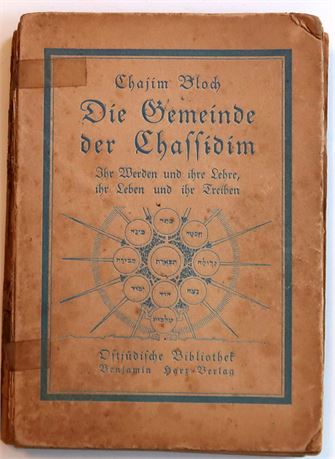 R. Chayim Bloch (full name R. Moshe Chayim Ephraim Bloch, 1881-1973) was a Hasidic and Kabbalistic writer from the present-day Ukrainian-Romanian border region. and rabbi. Chajim Bloch married Golda (Gusta) Landmann from Narajow (Galicia) in 1904. They had two daughters: Regina Neugroeschel-Bloch (born 1905) and Mirjam Bloch-Berger (born 1910). Bloch was a rabbi and philosopher and studied Kabbalah. After the advance of the Russians in 1914, he emigrated to Vienna. In 1915 he served as an army rabbi in the Hungarian army. During this time he wrote the book The Prague Golem. From 1918 to 1920 he was rabbi of the Jewish community of Liesing near Vienna. From 1933 he opposed the distribution of anti-Semitic pamphlets, which mainly contained the legend of ritually murdering Jews. In March 1938 he was arrested by the Nazis and transferred to a concentration camp. He was able to escape to the United States via the Netherlands. There he published the book Das Jüdische Amerika - Wahrnehmungen und Betrachtungen, about Jewish life in the United States. He also wrote in Hebrew, English and Yiddish. In 1963 he went almost blind.