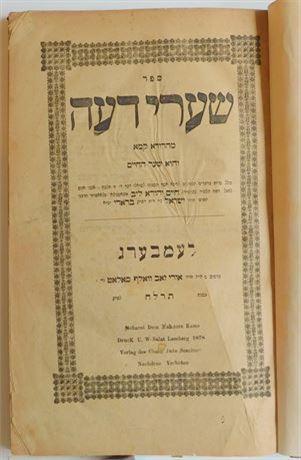 R. Chaim Yehuda b. Israel Litwin (1840-1903) was considered as a Talmudic Gaon with a great memory and depth of sharpness. The great rabbis were in awe when they met him, and none other than the Gaon R. Yosef Shaul Nathanson, the head of the rabbinical court of Lwów in Galicia, mentions him several times in his well–known book “Shoel–Umeishiv” regarding his clarity in matters of rabbinical decisions requiring special adjudication and clarifications.

R. Chaim Yehuda went through a tense period in his personal life. According to the history of those times, when he arrived in Smorgon in the year 5646 (1886) he was known as the “Rabbi of Brody” of eastern Galicia. He was born in Bobriusk (White Russia) in the year 5600 (1840) and was known already in his youth as a genius [iluy]. He got married in Sośnica (district of Czernihów). From the name of this town, he gained his nickname “The iluy of Sośnica,” which stuck with him throughout his life. He was employed there in commerce and business through his wealthy father–in–law. When his father–in–law's situation weakened, he too lost his fortune. When he later resided in Minsk, the greats of that city, especially the wealthy scholar R. Zusia HaCohen Rappaport, drew him near to assist. However, all of this comfort did not satisfy him. He became sick from all the anguish and traveled abroad to consult with physicians. He spent time in Germany, Hungary, and Galicia. In Lwów, he was approached by the rabbi of the city, the aforementioned R. Yosef Shaul Nathanson. He received spiritual and material support from R. Nathanson.

At that time, in the year 5629 (1869), the Gaon R. Shlomo Kluger, the head of the rabbinical court and rabbi of the splendid community of Brody, died. The “Sośnicani” who was a “Russian” guest, was appointed to take the place of the late illustrious leader of Brody, thanks to the special recommendation of the Gaon, the head of the rabbinical court of Lwów. He filled this role successfully for close to 18 years (until the year 5645 – 1885), and became the expert in responding on matters of halachic decisions for famous rabbis from near and far, as he expressed his opinion in serious elements of Jewish law.

This Gaon and head of the rabbinical court of Smorgon died after a lengthy illness that left him bedridden for two years. Words of appreciation were published in the three Hebrew newspapers of that time: Hamelitz, Hatzefira, and Hatzofeh (of Warsaw). In the first newspaper it was written that during the funeral of this Gaon, as he was being brought to his final resting place, “all the shops in Smorgon were closed and locked. All the workers in the factories and the tradesmen ceased their work,” and that “all of them took care to give final honors to their rabbi.” It was also written there that six eulogizers delivered bitter (sorrowful) eulogies over the deceased and described the value of his greatness in Torah.

The name of this Gaon of Smorgon was perpetuated in his responsa book “Shaarei Deah” that was already printed in the year 5644 (1884) when he was the rabbi of Brody. This book includes many responsa from this author with significant content and scope on various issues in the sections of the Code of Jewish Law, and especially in matters of marital law and the releasing of agunot which require expert scholarship. This great author took a place for himself in these difficult, thorny matters with his scholarly deliberations and decisive opinions.

His solutions in matters of matrimonial law were very appropriate and realistic in the community of Brody, a border city near the division between Austrian Galicia and Russia, at the beginning of the 1880s. During that time, thousands of Jewish refugees gathered in Brody. These refugees included men and women of various types who had no knowledge of their family pedigree with respect to marriage and divorce. This made it difficult to work out such matters in the court of the rabbi of Brody. Several matters required exacting and detailed deliberation based on the facts together with the Halachic clarification.

R. Chaim Yehuda writes the following in one of his responsa: “In the year 5642 (1882), our city of Brody was a gathering point for immigrant refugees from Russia who had been persecuted there. Many passed through here to America, the place of freedom and liberty in the human kingdom as well as the Kingdom of Heaven. In our great sins, many of the travelers cast off the yoke of Torah and proper behavior. Therefore, we deal with many gittin [bills of divorce] in our court on a daily basis, for the husband wants to travel afar whereas the woman does not – or vice versa.”

The painful points in these types of situations are the dangers of Jewish women becoming an agunah [10] because such husbands are trying to evade their wives as they travel afar, far from their acquaintances, townsfolk, and environment; as well as the concern of the large number of such women who know or do not know their status. Such questions kept R. Chaim Yehuda very busy. He did the best he could with his deep expertise and sharpness. With his clear and wise deliberation, he knew how to decide such matters and determine a clear, incisive decision in such cases.

Regarding the unique realities that were created at that time in Brody and the region due to the waves of refugees that swept into the cities, we find a discussion in a second responsa in the book “Shaarei Deah” beginning with the following words: “In the wake of the tribulations, disturbance, and persecutions of the masses of Jewish residents of greater Russia…” These two sources are not known to Jewish researchers who concerned themselves and wrote about that era.