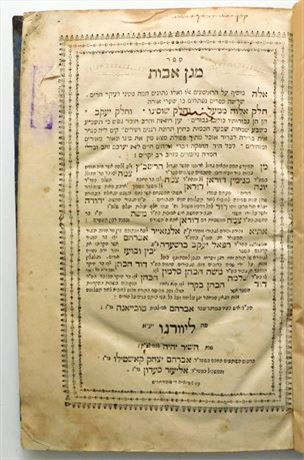 Only edition of this philosophic work by a leading Sephardic sage, R. Simeon ben Zemah Duran (Rashbatz). In three parts (a fourth part on Avot was printed separately), Magen Avot consists of Helek E’ me-ma’al, Helek Shoshenu, and Helek Ya’akov. The subject matter covered in Magen Avot is the existence of God and His unity, the work of creation, the existence of angels, that the Torah is eternal, on the coming of the messiah and the resurrection of the dead. There are introductions from R. Abraham Toviana and from R. Simeon ben Zemah followed by the text.

R. Simeon ben Zemah Duran (Rashbatz, 1361–1444) was a rabbinic authority, philosopher, and scientist. He was born in Majorca to R. Zemah Astruc Duran. In his youth Simeon studied in Palma (Majorca) at the yeshivah of Ephraim Vidal, who was martyred in the year 1391, and in Aragon at that of R. Jonah Desmaestre , whose daughter he later married. Educated in accordance with the old Spanish method, he acquired a thorough knowledge of mathematics, astronomy, science, logic, and particularly medicine, which was to become his profession. After his return to Majorca, Simeon practiced as a physician and surgeon in Palma, and he seems to have been in comfortable circumstances. He was also highly esteemed as a rabbinic scholar and even his teacher Ephraim Vidal sought his advice. His prestige there can be gauged from the fact that 44 years after he had left the island he addressed a letter to the Jews of the island reproaching them for negligence in some religious practices and admonishing them to change their way of life. After the massacre of 1391 in which he lost all of his fortune, Simeon left Majorca for Algiers together with his father and family. Jews from other parts of Spain also immigrated to North Africa, and the arrival of the immigrants had a beneficial effect upon the native Jews there. It caused a revival of knowledge and scholarship, which had been neglected and was in a state of great decline. Spanish rabbis now became religious leaders of African communities. In Algiers the aged R. Isaac bar Sheshet was appointed chief rabbi and was also nominated a supreme judge of the Jews by the king. Simeon seems to have joined his bet din. Having lost all his fortune and being unable to earn his livelihood from his medical profession, since the native population resorted to superstitious practices rather than to medical help, he was forced to accept a salaried office of rabbi. As Maimonides had prohibited the acceptance of a salary for a rabbinical office, and since in Algiers only Maimonides' decisions were regarded as authoritative, Simeon later found it necessary to justify his action. The nature of Simeon's official activity during the lifetime of Isaac b. Sheshet can be seen from the following examples. In 1394 a commission to deal with matrimonial laws was appointed, consisting of Bar Sheshet, R. Isaac Bonastruc , a rabbi in Algiers, and Simeon, who was asked by the other members to draft the ordinances; his draft was accepted in its entirety. Originally intended for the Spanish immigrants, the ordinances were soon adopted by some of the native Jews as well and were authoritative for African Jewry for centuries. A ban against informers issued about that time was also signed by Bar Sheshet, Bonastruc, and Simeon. From the very fact that Simeon signed third, it is obvious that he was not assistant chief rabbi as some scholars believe (at least not at that time). Much has been written about the relationship between Bar Sheshet and R. Simeon. On the one hand Simeon respected the older rabbi, but on the other hand the latter bitterly complained of Simeon, who himself also confesses "I was childish and behaved impudently toward a rabbi who was very old and distinguished in learning" (Tashbeẓ, 1, no. 58). In view of this there can be no doubt that a certain tension had existed between the rabbis, the active party being Simeon. The reason for this animosity is not quite certain; it may have been the appointment of the chief rabbi which annoyed Simeon, who although much younger, regarded himself no less worthy of the post owing to his secular and rabbinical knowledge. It seems that R. Isaac bar Sheshet, being good-natured and peace-loving, succeeded in the course of time in dispelling the greater part of the unfriendly atmosphere. Soon after Bar Sheshet's appointment as judge by the king, Simeon wrote a responsum in which he tried to prove that such an appointment was not permitted, but he did not publish it (ibid., 162). Bar Sheshet often consulted Simeon on various matters, asking him to deal with them and to write responsa. After Isaac bar Sheshet's death (1408) Simeon was appointed chief rabbi (he himself says dayyan) with the request that his appointment not be confirmed by the king. (According to the report of the Algerian rabbis in the introduction to Tashbeẓ, R. Simeon's appointment already took place during the older man's lifetime.) During his period of office Simeon was very active. While he had to fight some practices not in accordance with Jewish religion current among the native Jews, he had to raise his voice against his own countrymen who criticized the doctrines of terefah and were lax in the observance of some commandments. As judge, Simeon was regarded as an undisputed authority, and interesting facts have become known of his legal proceedings. From various communities, questions were sent to him about religious and legal matters. He had to deal with the problem of the Marranos from the religious and legal points of view. Of his pupils only R. Abraham ha-Kohen Sholal is known by name, but he may have been his pupil when he was still in Majorca.