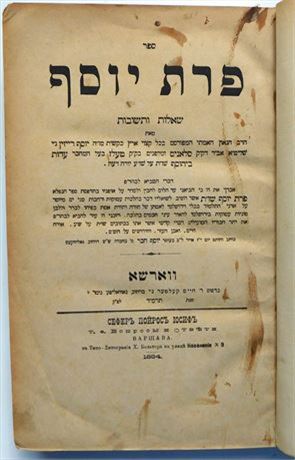 461 responsa and notes to the Shulhan Arukh by R. Joseph ben Isaac Rosen of Telz and Slonim. The text is in two columns in rabbinic type. R. Joseph ben Isaac Rosen (d. 1885) was a Russian rabbi and author. R. Rosen was born in Gorodok, Belorussia. His father intended him for a business career, but he early displayed unusual scholarly abilities and studied for the rabbinate. His first position was in Gorodok near Vitebsk, and in 1864 he was appointed rabbi of Telz (Telsiai). In 1873 he was appointed rabbi of Slonim, succeeding the renowned R. Joshua Isaac Shapira, known as "Eisel Harif." The period of his rabbinate at Slonim was exceptionally difficult for him. The maskilim of Slonim had begun to organize themselves and made considerable progress. Nevertheless, as a result of his moderation and conciliatory ways, his rabbinic authority remained unimpaired, and he enjoyed the respect of both the Hasidim and the maskilim. In 1881 a fire broke out in the city, as a result of which about 75% of its Jewish inhabitants were left homeless. Rosen placed himself at the head of an organization to rehabilitate them, and through his organizational ability and moral influence he succeeded in effecting the rebuilding of the homes and the erection of new and modern communal buildings. Rosen's daughter married R. Isaac Jacob Reines. All his works, which display his profound learning, include his name in their titles. They are: Edut bi-Yhosef (Vilna, 1866), novellae to the Shulhan Arukh, Yoreh De'ah; Porat Yosef (Warsaw, 1884), responsa and novellae to the Shulhan Arukh, Hoshen Mishpat; and She'erit Yosef (ibid., 1914), responsa and halakhic clarification.