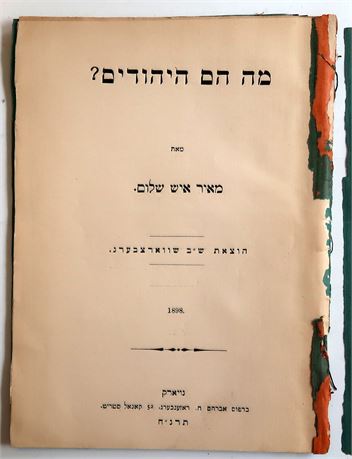 An essay on the status of Jews as a nation by Meir b. Jeremiah Friedman (1831-1908) born in Horost, Slovakia. From 1843 to 1848 he studied in Ungvar at the yeshiva of his relative R. Meir Asch. Between 1848 and 1858 he underwent several crises and changes. Successively, he lived as an ascetic Ḥasid preparing for immigration to Ereẓ Israel, temporarily came under the influence of the Haskalah, returned to the study of the Talmud and was ordained, married, and became a farmer; his wife died, he was impoverished, and he became a maggid. In 1858 he settled in Vienna and attended the university as a non-matriculated student. From 1864 on he served as librarian, Bible teacher to adults, and Talmud teacher to the young at the bet midrash in Vienna. After 1894 he also taught at the rabbinical seminary there.

In his lifetime Friedmann was known for his studies of and lectures on aggadah, and even earned the title mara deaggadeta ("master of aggadah"). His most important contributions are concerned with the halakhic Midrashim. He discovered lost sources, determined correct versions, and illuminated difficult passages; his writing is exceptionally erudite, profound, logical, and elegant of expression. His influence on Jewish scholarship was considerable. Many of the commentaries and interpretations of later talmudic scholars and researchers originated in his work. Friedmann maintained that "the Talmud is the foundation of Judaism and whoever abandons it is abandoning life"; this conviction affected all his creative work and activities. At the height of the Haskalah Friedmann was calling for traditional education, even drawing up plans for traditional Jewish secondary schools and universities. He was also active in the Zionist movement and founded the Association for the Dissemination of the Hebrew Language.

Friedmann edited midrashic texts with introductions and commentaries, the commentaries entitled Me'ir Ayin. The halakhic Midrashim include Mekhilta (1870), Baraita de-Melekhet ha-Mishkan (1908), and Sifrei (1864); a part of the Sifra, which he had begun editing, was published posthumously (1915). He published Pesikta Rabbati (1880) and Tannade-vei Eliyahu (1902), aggadic texts; Talmud Bavli: Massekhet Makkot (1888) with a short interpretation as an example of a scientific edition of the Talmud; and a pamphlet about translating the Talmud, Davar al Odot ha-Talmud (1885). He published many works on the literature of halakhah and aggadah, its characteristics and principles, as well as books and articles on other Jewish subjects, including Bible, particularly commentaries on the Pentateuch, Judges, Samuel, Isaiah, Hosea, and Psalms; and the Targums of Onkelos and Aquila; the Holy Land; and Jewish prayer and poetry. He produced a number of sample textbooks on the Talmud and Mishnah for schools, and several of his lectures and sermons were published, although most of them can only be found incorporated into the works of his contemporaries. With I.H. Weiss Friedmann edited the periodical Beit ha-Talmud (1881–89). Most of his articles appeared in that and other publications under his pen name "Ish Shalom."