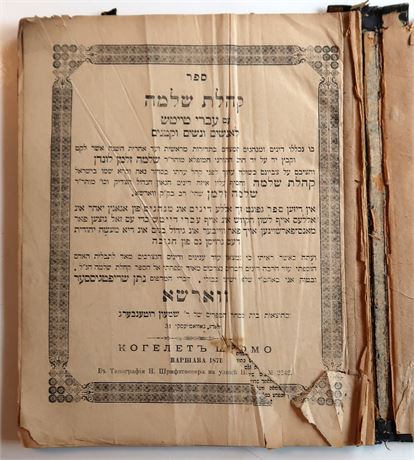 R. Solomon Zalman b. Moses Raphael London (1661–1748), author, translator, and bookseller. R. London was born in Nowogrudok (Lithuania). Between 1709 and 1735 he published and sold books in Amsterdam, London, and Frankfort on the Main. He is best known for Kohelet Shelomo (1722), a devotional handbook which included occasional and domestic prayers and benedictions together with ritual laws and instructions both in Hebrew and Yiddish. It became popular in Western Europe and was reprinted many times, including later editions in which the Yiddish was replaced by German (cf. the Ger. ed. of 1919 (?) and that by A. Sulzbach, 1908). Kohelet Shelomo also contains a Passover Haggadah with R. Leone de Modena's commentary Zeli Esh. This Haggadah also appeared separately (1733) and was reprinted several times. Hinnukh Katan, a small Hebrew-Yiddish vocabulary, was added to some of the editions. R. London's Zokher ha-Berit (1714), which followed the same lines, detailed the ceremonies and laws of circumcision and redemption of the firstborn, with Yiddish translation. He also published a siddur, according to the German-Polish rite, under the title Tikkun Shelomo (1712, 17332, often reprinted), with Yiddish text added; it included the Tikkunei Shabbat of R. Isaac Luria. R. London prepared a number of ethical and halakhic compendia by various authors, providing a Yiddish translation. These included such works as Orhot Zaddikim (author unknown, 1735); R. Jonah Gerondi's (13th century) Iggeret ha-Teshuvah (1742); and R. Isaac b. Eliezer's (15th century) Sefer ha-Gan (1747).