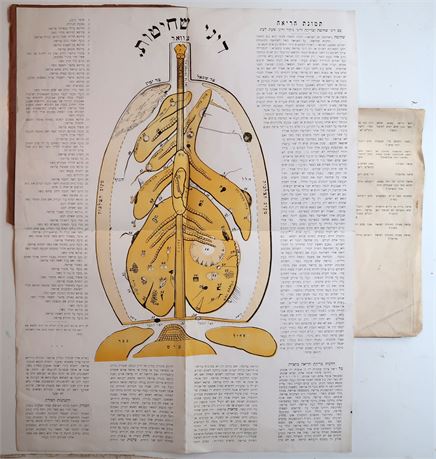 Review of the halakhot pertaining to shehitah (ritual slaughtering of animals in accordance with Jewish law) and bedikah (examination) in question and answer form (responsa) by R. Nathan Klein of Winstead and West Milford, Connecticut. Following the text is a large colored foldout chart of the lungs with detailed of the various parts and areas of concern. The verso of the title page has a preface from R. Klein. There is a review of the laws of nikor and of me-et le-et, followed by the text in two columns, each column comprised of a query and next to it a brief response summarizing the pertient halakhot. At the end is the foldout with numbers on the parts of the lung. To the right are identifications of the numbered parts, to the right a discussion of the lungs.

Shehitah is the Jewish method of slaughtering permitted animals or birds for food. The underlying principle of the procedure is to kill the animal in the swiftest and most painless way possible by cutting horizontally across the throat, severing the trachea (windpipe), the esophagus, the jugular veins, and the carotid arteries. The knife (see below) is drawn across the throat of the animal in one or more swift, uninterrupted movements. In the case of animals most of the trachea and esophagus must be severed, while with birds it is sufficient to sever the largest part of either one. In the first instance, however, both are severed even in birds. "Then thou shalt kill of thy herd and of thy flock which the Lord hath given thee, as I have commanded thee" (Deut. 12:21) is the Pentateuchal basis of shehitah. Maimonides lists shehitah among the 613 commandments (Sefer ha-Mitzvot, 146) and rabbinic authorities state (Hul. 28a): "Moses was instructed concerning the rules of shehitah." Meat that is “nebelah,” improperly slaughtered, is not kosher for consumption. Additionally, meat that is “treifah” may not be eaten. This word is commonly translated as “not kosher,” but literally means “torn.” The origin of the term's use stems from the passage, “And you shall be a sanctified people to me. And the flesh that has been torn (“treifah”) in the field may not be eaten, and should be cast to the dogs.” (Exodus 22:30). The phrase implies two types of “treifah,” (1) flesh torn from a live animal, and (2) the flesh of animals whose organs have been damaged by being torn. Both such defects would render the animal un-kosher. <p>With regard to the latter definition of “treifah,” the types of injuries and diseases that render an animal un-kosher are defects that affect the major organs. If there is reason to suspect that an animal might be “treifah,” an examination must be performed. Under normal conditions, most animals do not suffer from disease or injury and need not be examined. Whether certain animals must be examined, and which organs need be examined, depends on the country and the tendency toward certain diseases in those countries. For example, in the United States it is customary to examine the intestines of fowl, since many have been found to have abscesses in that area. It is almost always necessary to examine the lungs of all animals since they are often defected so as to render the animal unfit for consumption. This examination of the lungs is called the “b'dikah” (lit. examination). The bedikah process is very methodical, requiring both an internal and external examination. First the lungs are examined before they are removed from the chest cavity. The examiner (“bodek”) opens the diaphragm and reaches his hand inside the chest cavity. He passes his hand over the lobes of the lungs, thereby determining whether there are adhesions on the lungs and whether or not the lungs are properly formed. The examiner then removes the lungs from the chest and examines them externally to make sure there are no visible defects. If the lungs are found to have no defect, they are described as “glatt” kosher. Kosher meat need not be “glatt.” If adhesions are found on the lungs, as long as they can be peeled off without perforating the lungs, the animal is still considered kosher. After the adhesion is peeled from the lung, the lung is inflated and the peeled area is placed in water so that the examiner can determine whether there has been a perforation.

The next step in the process of making meat kosher for consumption is known as “nikur” in Hebrew, and “traboring” in Yiddish (porging, de-veining, lit. to dig out). The veins, arteries and forbidden fats are removed from the animal. In order for an animal to be kosher, all of the blood must be removed. In order to enable this, during nikur all major arteries are severed and exposed before “koshering” to permit the free flow of blood during the koshering process that follows. Often these arteries are removed altogether from certain parts of the body, including the neck through the fore-shoulder and foreleg, the ribs, the brisket, the navel area and the tongue. The heart is opened to allow excess blood to flow out, and the brain membrane and neck glands are removed because the brain membrane consists of many blood vessels and the glands are saturated with the blood from the slaughter. All clotted blood is either scraped or washed away before koshering. Blood blotches on meat or poultry are cut open to allow for the blood to flow out during the koshering. Other than the blood vessel in the neck which must either be severed or removed, blood vessels in poultry need not be removed. Often the wing tips are clipped and the legs are cut at the knee joints to allow for free flow of the blood during the koshering process.