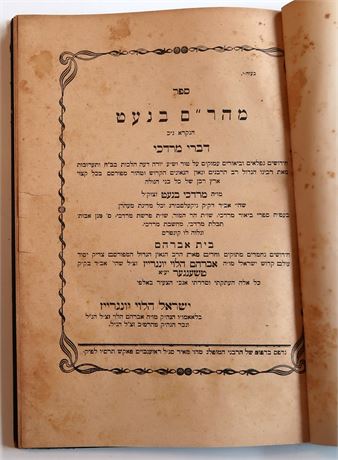 On Yore De'ah by R. Mordecai ben Abraham Banet (Benet), (1753–1829), Moravian rabbi, one of the leading talmudists of his time. R. Banet was born in Csurgo, Hungary. He studied at the yeshivah of Fuerth under Joseph Steinhardt, author of the responsa Zikhron Yosef. In 1784 he was appointed dayyan in Nikolsburg, Moravia. In 1787 and 1788 he served as rabbi of Lundenburg, Moravia, and subsequently of Sasvar, Hungary, and from 1789 as rabbi and head of the yeshivah of Nikolsburg, and district rabbi of Moravia. R. Banet's yeshivah attracted students from near and far, and during the 40 years that he headed it several thousands of students passed through. R. Banet fought vigorously against the Reform movement, particularly against Aaron Chorin, and vehemently opposed the founding of the Reform Temple in Hamburg. At the same time he displayed a certain understanding of the spiritual needs of his contemporaries. At the request of the government, he prepared two courses of study for students for the rabbinate which included secular studies. His proposals were published in the Toledot Mordekhai Banet (1832) of his son Jacob Abraham. Under Banet's influence, his son R. Naphtali Banet compiled a handbook (in Hebrew and German) on the fundamentals of the Jewish religion. Because of his great influence on his community, his talented leadership, and the support of the government, R. Banet succeeded in postponing the disintegration of Moravian Jewry for at least one generation later than that of the breakup of Bohemian Jewry. He was one of the chief opponents of Saul Berlin in the controversy over his work Besamim Rosh (Berlin, 1793).

Of R. Banet's other only Be'ur Mordekhai (2 vols. Vienna, 1805–13), novellae to the Mordekhai of R. Mordecai b. Hillel, was published during his lifetime. After his death the following were published: Magen Avot (Zolkiew, 1835; 1903; with notes by R. Shalom Mordecai ha-Kohen), on the main categories of work forbidden on the Sabbath; Har ha-Mor (Prague, 1861), responsa, published together with the Hokhmat Shelomo of Solomon Kwetsch, his pupil; Tekhelet Mordekhai (1892), aggadic homilies and talmudic novellae, also containing a biography of the author; Mahashevet Mordekhai (1902), aggadic novellae to the Pentateuch; Sefer Maharam Banet (also called Divrei Mordekhai; 1906), novellae on aspects of the dietary laws with notes by the publisher R. Abraham Jungreisz of Czenger.