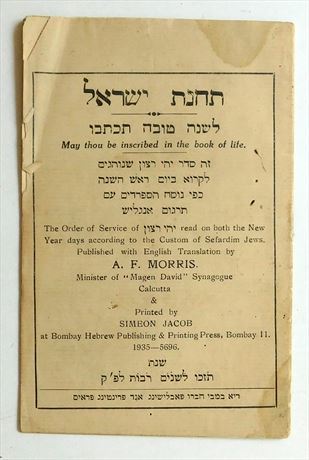 Title:  The order of service of יהי רצון read on both the New Year days ...with English translation by A.F. Morris.. Calcutta...

This small volume contains "the order of service יהי רצון"" read on the Day of Atonement according to the custom of Sefardim Jews…with English translation by A.F. Morris, Minister of "Maghen David" Synagogue Calcutta." The text is in Hebrew, with the English translation on the facing page.

Calcutta city in Bengal, N.E. India. The earliest association of Jews with Calcutta goes back to transient Jewish merchants, especially from Fort St. George (Madras) who toward the end of the 17th century established commercial contacts with Bengal. One of the most prominent was Alvaro de Fonseca. In the second half of the 18th century, Abraham Jacobs distinguished himself by providing food for the survivors of the "Black Hole" tragedy (1756). He is also mentioned as a confidential agent of the East India Company there. A permanent Jewish settlement came into existence only at the beginning of the 19th century when Arabic-speaking Jews from Syria and Iraq who had previously resided in Surat settled in Calcutta. The first Jewish merchant to settle there was Shalom b. Obadiah ha-Cohen (d. 1836), originally from Aleppo, who, after a successful stay in Surat, arrived in Calcutta in 1798 and developed a profitable trade there in jewels and precious stones. In 1816 he became the court jeweler of the Muslim ruler Ghazi al-Din Haydar and his son at Lucknow. Shalom ha-Cohen was soon joined in Calcutta by members of his family and business associates from Surat and Bombay, among whom Jacob Zemah Nissim figured prominently. With the arrival of Moses b. Simon Duwayk ha-Cohen and his family from Aleppo, Calcutta began to develop into one of the most prosperous and flourishing cultural and economic centers of Jewish life in India. Jews from Cochin and Yemen flocked there and took an active part in its development.

The first synagogue built in 1831 in Calcutta was called Neveh Shalom in honor of its founder, Shalom ha-Cohen. It was followed by the Beth El in 1856 and then by Magen David, built in 1884 in memory of David Joseph Ezra (d. 1882). Probably the largest synagogue in the East, it was an imposing landmark distinguished by its beautiful architecture, and had a fine collection of Torah scrolls. Elijah b. Moses Duwayk ha-Cohen served as spiritual leader of the Magen David congregation for over 50 years. Glimpses into the internal communal life are offered by the Judeo-Arabic diaries (Naurooz) of Shalom ha-Cohen, of Moses b. Simon Duwayk ha-Cohen (d. 1861), and of Eleazar b. Aaron Saadiah Iraqi ha-Cohen (d. 1864), all preserved in the Sassoon Library, as well as by the accounts of Western visitors such as Benjamin II (1850), Jacob Saphir (1859ff.), Solomon Reinman (1884), and later emissaries and travelers. A central role in the development of Jewish life was played for many decades by Sir David and Lady Ezra and communal leaders such as Elias Meyer, the families Jehuda, Masliah, Jacob, Gabbai, Elias, Kurlander, and others. Hospitals, synagogues, boys' and girls' schools, and other educational and charitable institutions were established. Calcutta Jewry included prominent lawyers, physicians, industrialists, and artists.

Hebrew printing began in Bombay with the arrival of Yemenite Jews in the middle of the 19th century. They took an interest in the religious welfare of the Bene Israel, for whom - as well as for themselves - they printed various liturgies from 1841 onward, some with translations into Marathi, the vernacular of the Bene Israel. Apart from a short lived attempt to print with movable type, all this printing was by lithography. In 1882, the Press of the Bombay Educational Society was established (followed in 1884 by the Anglo-Jewish and Vernacular Press, in 1887 by the Hebrew and English Press, and in 1900 by the Lebanon Printing Press), which sponsored the publication of over 100 Judeo-Arabic books to meet their liturgical and literary needs, and also printed books for the Bene Israel.