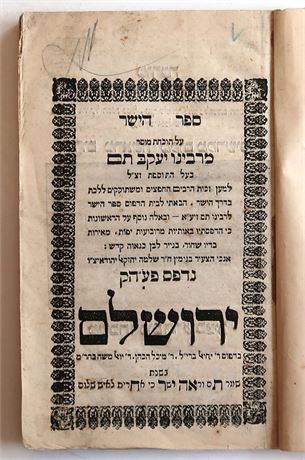 Popular ethical anonymous work here attributed to the tosafist Rabbenu Tam (R. Jacob ben Meir Tam). It was probably written in the 13th century, one of the most popular ethical books in the Middle Ages. The frequent attribution to R. Tam is due to the fact that he too wrote a book by that name (Sefer ha-Yashar le-Rabbenu Tam, Vienna, 1811); his writing, however, is concerned only with halakhic problems. Some manuscripts attribute the book to Zerahiah ha-Yevani, but there is no evidence to bear out the authenticity of such an ascription. Some scholars have suggested that the author might have been R. Jonah Gerondi, one of the foremost writers in the field of ethics in the 13th century; however, the difference between R. Jonah's known views and those expounded in Sefer ha-Yashar would suggest otherwise. There is also some confusion regarding the nature of the book and the school of ethical concepts to which the author adhered. The style and language conform to contemporaneous philosophical ethical writings and ideas; the author especially made use of Aristotelian terms and concepts. The work, however, is also marked by a tendency to deviate from the central stream of philosophical conventional ethics. This is evidenced in some of the main ideas. The difference is so great that some scholars have concluded that the author might have been a kabbalist who did not want to reveal the full scope of his mystical beliefs. Some ideas in the work also bear great similarity to the ethical concepts of the Ashkenazi hasidic movement which reached its peak in the 13th century, and especially to Sefer ha-Hayyim which was written by one of the Hasidei Ashkenaz.

Most of the unusual ideas are found in the first part of the work which describes the creation and explains why the wicked were created together with the righteous. The rest of the work is concerned, in a rather conventional way, with the main themes of Jewish ethics: love and fear of God, repentance, prayer, and good deeds. In several editions there are variations in the arrangement of the chapters and even in the content. No critical edition of this work has been published, and until the correct text is ascertained, the problems concerning the authorship and the underlying philosophic thought cannot be solved satisfactorily.

Rabbenu Tam (R. Jacob ben Meir Tam, c. 1100–1171) was the son of R. Meir ben Samuel and the grandson of Rashi. He is the foremost of the Tosafists and was the leading Talmudist of the twelve century. R. Tam lived in Ramerupt, France where he engaged in moneylending and viticulture, typical occupations of the Jews there at that time. During the Second Crusade he was attacked by Crusaders who were passing through, and was miraculously saved from death (1146). After this experience R. Tam left Ramerupt. He was recognized by all contemporary scholars, even by those in remote places, as the greatest scholar of the generation. R. Abraham ibn Daud of Spain, and Abraham b. Isaac and Zerahiah ha-Levi of Provence refer to him with great esteem, while the scholars of southern Italy, some his senior in years, submitted their halakhic problems to him. Pupils came to his bet midrash from as far away as Bohemia and Russia, and took R. Tam's teachings back with them on their return to these lands. He won this great renown although he never moved or traveled far from his place of residence in northern France.