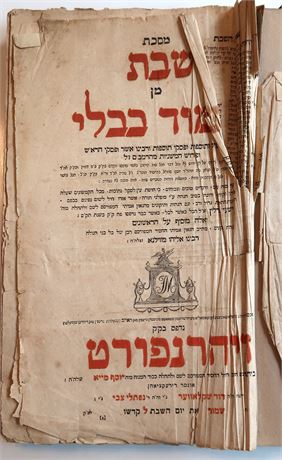 Tractate printed in the Dyhernfurth second prining of the Talmud. The original Dyhernfurth printer, Joseph May died in 1811. His elder brother, Michael Simon, together with two brothers-in-law David Sklower and Naphtali Zevi ben Moses David Hochmavitz, already active in the press, then operated the printing-house of May. They, too, continued to publish a large number of various titles and, according to Friedberg, at the end of 1815 they hastened to print a second edition of the Talmud in Dyhernfurth, which they completed in 1822. The acronym on Tractate Bava Batra is incorrect with a total of 1827. The motivation in beginning a new edition of the Talmud at this time was that the prohibition of printing the Talmud throughout Germany from the previous 1800-1804 edition for twelve years was expiring.

The title pages of this edition are similar to the previous with red and black in each volume. In this edition they added the glosses and correction of “the rav, the gaon… R. Elijah of Vilna (Vilna Gaon). The verso of the title-page of each  tractate has Piskle Tosafot, followed by the Talmudic text. After the gemara is Perush ha-Mishnayot of the Rambam and then annotations from Tosafot, ha-Rosh, and Rabbenu Gershom as one commentary.

The Jewish history of Dyhernfurth (Pol. Brzeg Dolny) is closely associated with the founding of a Hebrew press, more so than in other locations. Located west of Breslau in Silesia, Dyhernfurth was acquired in 1660 by the German chancellor Baron George Abraham von Dyhrn (1620–1671) of the Dyrrn family. It was granted town privileges by Leopold I of Habsburg in 1663 and officially named Dyhernfurth after the Dyhrn family. Originally part of Bohemia, it became part of Prussia in 1742, and, after World War II, became part of Poland.

Jewish settlement began in 1689, when Shabbetai ben Joseph Meshorer Bass (1641-1718) founded the first Hebrew press in that location, and by doing so, also the first Jewish community, comprised of the families of the workers at the printing-press. Bass, a biblical exegete, bibliographer, printer, and cantor, was born in Kalisz, Poland, where his parents were murdered in 1655 during the Swedish Muscovy wars. He was a basso (bassista) singer in the Altneuschul in Prague, from which the surname Bass (Heb., Meshorer) is derived. He relocated to Amsterdam in 1679; worked as a corrector (proofreader) and mastered the printing trade, leaving to establish his own press, in Dyhernfurth. Printing in has a distinguished history Both Bass and his son Joseph had to contend with the hostility of the Jesuits, but printing continued until 1762, from 1717 under Berel Nathan, husband of Bass's granddaughter Esther, and later under Esther herself. Other printing houses were established by Samuel b. Abraham Katz (until 1767), Abraham Lewin (until 1771), Solomon Koenigsberg (1774–75), M.L. May (until 1819), H. Warschauer & Co., and lastly D. Sklower whose press closed in 1834 when he moved to Breslau. The Dyhernfurth productions, which included a complete Talmud and Maimonides' Mishneh Torah, were very popular at the time, but business declined due to outside competition. A Yiddish newspaper, serving the Breslau community, was printed there in 1770.