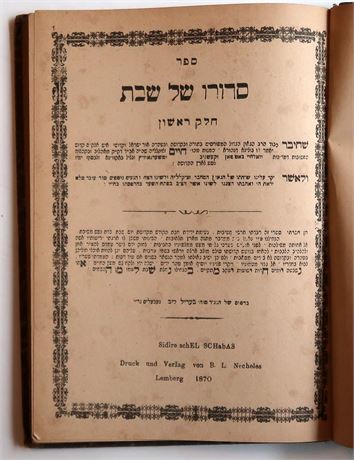 Kabbalistic homilies on Sabbatical subjects by R. Hayyim b. Solomon Tyrer of Czernowitz (c. 1760–1816). He was born near Buchach, Galicia. A disciple of R. Jehiel Michael of Zloczow, he later served as rabbi in Mogilev, Kishinev, Czernowitz and district, and Botosani. He had a profound knowledge of rabbinical literature and mysticism, was an eloquent preacher and a talented writer. He did much to spread Hasidism and opposed the spread of Haskalah in Romania. His resistance to certain government decrees forced him to relinquish his office in Czernowitz in 1807. In 1813 he emigrated to Erez Israel and settled in Safed.

He wrote the following additional works, which were published in many editions: Be'er Mayim Hayyim (Sudilkov, 1820, with Pentateuch; Czernowitz, 1849) novellae on the Pentateuch, in two parts; Sha'ar ha-Tefillah (Sudilkov, 1825) kabbalistic reflections on prayer; Erez ha-Hayyim (Czernowitz, 1861) in two parts: (1) a homiletic commentary on the Prophets and Hagiographa, and (2) novellae on the treatise Berakot.