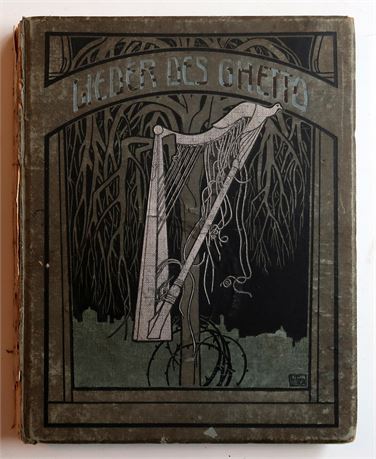 Profusely illustrated work of ballads on social themes by Ephraim Moses Lilien. In addition to the numerous sketches text is set within artistic art-deco borders, white against black for greater effect.

Ephraim Moses Lilien, (1874–1925) was an Austrian illustrator and printmaker. Lilien was born in Drohobycz, Galicia. He studied art in Cracow for a short time, but lack of funds forced him to return home. He eventually earned enough as a sign painter to go to the Academy of Fine Arts in Vienna. In 1895 he worked in Munich as a cartoonist; three years later he moved to Berlin, where he soon became known as a book illustrator. Lilien was the first artist to become involved in the Zionist movement. He took an active part in three consecutive Zionist Congresses and was a member of the Democratic Fraction, which stressed the need to foster Jewish culture. He was one of the founders of the Berlin publishing house, Juedischer Verlag, which he served not only as an illustrator but also as editor, manager, and publicity agent. He collaborated closely with Theodor Herzl; Lilien's photograph of the Zionist leader on the Rhine bridge, his Herzl portraits, and his decorations for the Golden Book of the Jewish National Fund became familiar to Zionists all over the world. In 1905 Lilien, along with Boris Schatz and others, was a member of the committee formed to establish the Bezalel School of Art in Jerusalem. He taught there for some months in the following year and revisited Palestine three times, on the last occasion as a lieutenant in the Austro-Hungarian army during World War I. In 1908 Lilien turned from book illustration to etching. Many of his etchings are views of Austria and Hungary, while others record his impressions of Palestine, Damascus, and Beirut. His drawings, executed mainly in india ink, show a crisp, elegant line and a strong contrast between black and white areas.