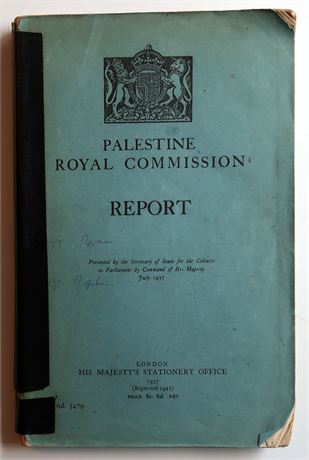 The report of the Palestine Royal Commission, often referred to as the Peel Commission. It came to the conclusion that partition was the best solution for both sides. Although this proposal meant neither Jews nor Arabs would get all they wanted, the commission believed that it offered many advantages to both sides. The Arabs would obtain national independence and finally be delivered from fear of ultimate subjection to Jewish rule. By converting the Jewish National Home into a Jewish state, the Jews would not only be free of the fear of Arab rule, but they "will attain the primary objective of Zionism - a Jewish nation, planted in Palestine, giving its nationals the same status in the world as other nations give theirs. They will cease at last to live a 'minority life.' A new sense of confidence and security would replace the existing feeling of fear and suspicion and both Jews and Arabs would obtain the inestimable boon of peace." The commission therefore proposed that Palestine be divided into: (1) a Jewish state, comprising the whole of Galilee and the Jezreel Valley, most of the Beth-Shean Valley, and the Coastal Plain from Ras el-Nakura (Rosh ha-Nikrah) on the Lebanese border to Be'er Tuviyyah in the south; (2) an Arab state comprising Transjordan, the hill country of Samaria and Judea, and the Negev; (3) a British zone under permanent Mandate, consisting of Jerusalem, Bethlehem, and their environs, a corridor to the coast at Jaffa, and Nazareth. British treaties of alliance with the Jewish and the Arab state would guarantee the protection of minorities, facilities for British forces, etc., and the Jewish state would pay a subvention to the Arab state.

The 20th Zionist Congress (Zurich, Aug. 3–17, 1937) declared that the Peel Commission's scheme was "unacceptable," but empowered the Executive to negotiate with the British government on "precise terms" for the establishment of "a Jewish state," provided that any scheme that might emerge would be submitted for approval to a newly elected Congress.