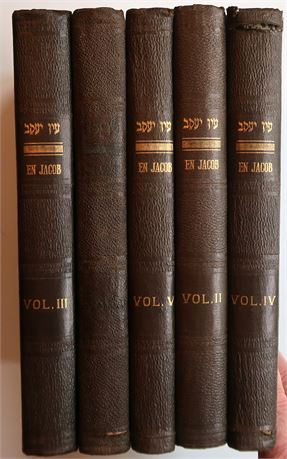 Ein Yaakov, with and English translation and commentary by prepared by R. Shmuel Tzvi Hirsch Glick of Chicago. It presents the original text on the right column of each page, with the corresponding English version to its left. It does not include any of the commentaries that appear in the classic version, but R.Glick's translation and accompanying footnotes suffice for comprehension.

Ein Ya’akov is the classic collection of aggadah in the Talmud compiled by R. Jacob ben Solomon ibn Habib (c. 1445-c.1515). Ein Ya’akov was among the titles proscribed and burned together with the Talmud after the pope’s bull of August, 1553, and subsequently placed on the Index librorum prohibitorum. The Council of Trent, which permitted the publication of the Talmud in 1564, and certain other works as well, did so by imposing onerous conditions, primarily concerning the expurgation of passages inimical to Christianity, and the substitution of acceptable terms for objectionable ones. Among the other conditions imposed was the prohibition of Hebrew books under their original names. The Talmud, for example, could not be reprinted as such, but could be reissued only if that name were omitted, it now being called shas, and Ein Ya’akov only as Ein Yisrael. Graetz, commenting on this situation, writes, “Strange, indeed, that the pope should have allowed the thing, and forbidden its name! He was afraid of public opinion, which would have considered the contradiction too great between one pope, who had sought out and burnt the Talmud, and the next, who was allowing it to go untouched.”

Ein Ya’akov continued to be published under the name Ein Yisrael in places where Hebrew printing was not restricted by the Inquisition. While many of these imprints may be so named simply because they are copies of earlier editions named Ein Yisrael, those printed in other places, such as this Frankfort a. Main edition, were named Ein Yisrael so that the work might be exported to Italy. Ein Ya'akov remained on the Index librorum prohibitorum until the very end, appearing on the last edition of the Index, issued in 1948.

The first Hebrew printing press in Calcutta was founded in 1840 by Eleazar b. Aaron Saadiah ʿIrāqī ha-Cohen and continued until 1856. A scholar and poet, ʿIrāqī was an expert printer who probably cast his own type. The products of his press, some of them his own writings, are comparable with the best European productions of the time. Another press, operated by Ezekiel b. Saliman Hanin from 1871 to 1893, printed the Judeo-Arabic weekly Mevasser in Hebrew type from 1873 to 1878. This paper was followed by Peraḥ (1878–88), printed from 1871 by Elijah b. Moses Duwayk ha-Cohen. Two further weeklies, Maggid Meisharim (1889–1900) and Shoshannah (1901), were edited and printed by R. Solomon Twena, author of almost 70 works published by his own press. (A. Yaari in Hebrew Press in Calcutta)