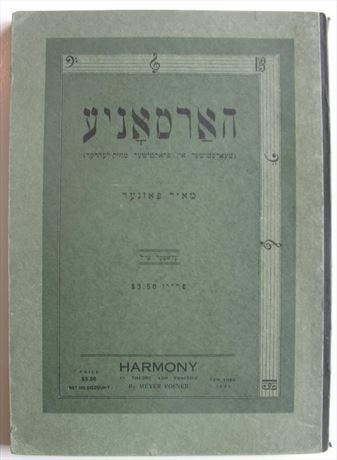 A work on harmony in music in Yiddish, with musical examples. Lithographed. The music was designed freehand by Charles Thomas.
Meyer Posner was a composer, arranger, and conductor active in New York's Yiddish musical world from 1919 until his untimely death in 1931. He was born in the Polish city of Plock, ca. 1890. Posner received his early religious education in Łódź, and it is unclear when he and his parents emigrated to London. He was choirmaster of the Borough Synagogue in London, ca. 1910. Around this time Posner composed a popular musical setting of Morris Rosenfeld's poem Herbst Bletlach (Autumn Leaves). He graduated from London's Guild Hall Conservatory in 1914. By 1916 Posner was music director and conductor at the Great Synagogue in Duke's Place. During these years he supposedly composed a Hebrew operetta entitled Ezra and Nehemia and a grand opera, Saul, though neither score is extant.

Posner emigrated to the United States in 1919 to conduct New York's Workmen's Circle Choir (Arbiter Ring Kor). He composed and arranged many choral settings of Yiddish songs (for piano or orchestra accompaniment) for this ensemble. Several of them were published by Metro Music between 1927 and 1930. Composer Lazar Weiner succeeded Posner as conductor of the Workmen's Circle Choir after his death in 1931.

During the 1920s, Meyer Posner led a hectic but productive musical life within New York and New Jersey's vibrant Jewish communities. Around 1922, he composed and conducted incidental music for two Yiddish plays, Amol iz Geven a Maise and Dos Groise Gevins. He published several music articles for the newspaper Der Tog in 1923 and in 1930 he conducted a vocal quartet for Der Tog's radio show. He is also the author of Elementarer Muzik Lerer (Elementary Theory of Music) (New York, 1928). For a time, he conducted choirs for cantor Josef Rosenblatt at the Hungarian Congregation Ohav Zedek and for cantors Mordechai Hershman, David Roitman, and Josef Shlisky in concert. In addition to the Workmen's Circle Choir, Posner directed the Synagogue Choral Alliance, the Children's Choir at the Sholom Aleichem Schools, and, in 1928, he succeeded Leo Low as conductor of the historic Paterson Hebrew Singing Society, founded in 1911. Around 1929, Posner's composition "The Machine," set to a biting text by Morris Rosenfeld, caused a great stir when it was performed by the 200-voice Workmen's Circle Choir with orchestra. He also provided Yiddish folk song arrangements for the Vilna Troupe's show Der Regenbogen (The Rainbow) during their 1930 New York tour.

Meyer Posner was married in 1929. He died suddenly on February 8, 1931, of a heart attack, while preparing for an orchestral performance of Mendelssohn's oratorio Elijah at New York's Town Hall. The vivid account of his funeral given in The Forward describes 700 mourners standing in the freezing rain on New York's Lower East Side listening to cantors Josef Rosenblatt, David Roitman, and Josef Shlisky sing psalms and memorial prayers while accompanied by the Shul Singers Union and Workmen's Circle choirs.