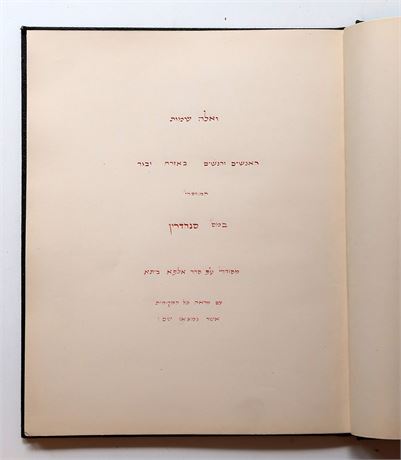 Rare concordance of the names appearing in tractate Sanhedrin by Dr. Berthold Jeiteles. The title-page states that it is the names of the men and women mentioned in tractate Sanhedrin. The alphabetic listing comprising this volume is in order by name, and provides location in the tractate. Text is on the recto of each page, the verso being blank. A rare detailed work, apparently never published as it is not recorded in bibliographic sources.

Dr. Berthold Jeiteles (1872-1958), also known as Yiśakhar Ber Yaiteles, was born in Prague to a prominent local family, which included many generations of scholars and community leaders, as well as scientists. He studied chemistry, and worked as the owner of a glove factory. After the German occupation of Prague in 1939, he was deported to Theresienstadt, and from there to Auschwitz. In Auschwitz he was returned to Theresienstadt because too many people were sent that day. However, his name remained on the list of those who had been killed, so he was never sent to Auschwitz again. He remained in Theresienstadt, where he survived until the liberation. After the war he moved to New York, where he wrote dozens of books on the Talmud and other religious subjects. In 1945 he returned to Prague and found all his hidden manuscripts intact. In 1948 he moved to New York. After his death, an Institute for Publishing the Talmudic Encyclopaedia of Dr. Berthold Jeiteles was established in Manchester (England) and the first book of Konkordanẓyah Talmudit (1951/52) on Rav was published. Still unpublished are 45 volumes on all personalities of both Talmuds, Tosefta, and Midrash and their opinions, as well as 18 volumes of Ẓiyyunim, an alphabetically arranged glossary of talmudic terms and names.