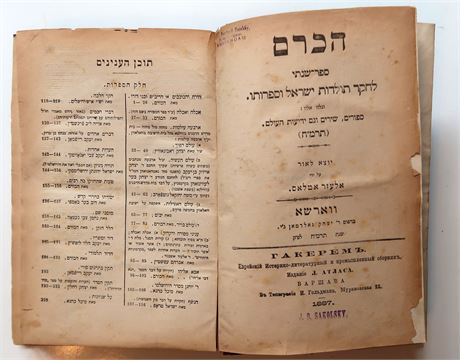 Only edition of this journal, the only edition published, dedicated to the study of the history of Israel and its literature, edited by R. Elazer Atlas. The title-page describes Ha-Kerem as including tales, verse, and worldly subjects. There is a lengthy two-page table of contents describing the varied subject matter of ha-Kerem. It begins with on article on the moon, stars, or the Ribash and his generation. Next is an article entitled אכלה ואכלב based on the sefer Mesorah; four visions, this concerning the bet midrash of the rabbanim of Vilna, and continuing with an extensive list of varied articles. The authors are noteworthy, including such names as R. Isaac Rabinowitz, R. Abrham Epstein, R. Jacob ha-Levi Epstein, R. Jacob Reifman, and many more,

Elazer (Lazar) Atlas was a literary critic (1851-1884). He was born in Beisegola, in the government of Kowno, Russia, and spent at Novo Zhagory in the study of the Talmud. In 1884 he arrived at Warsaw and became one of the chief contributors to the yearbook "Ha-Asif," which N. Sokolow then published. In 1888 he edited the year-book "Ha-Kerem," of which only one number appeared. Next, he collected a number of literary essays, which he had published from time to time in "Ha-Ẓefirah," and issued them under the title ("What Is Progressive and What Retrogressive," Warsaw, 1898). In 1900 he again contributed to Sokolow's "Sefer ha-Shanah." Atlas' occupation is that of a bookkeeper. In 1895 he settled at Byelostok, in the government of Grodno, Russia. When practically unknown in the literary world, he was entrusted with the criticism of such important works as Herzberg's "Handelsgeschichte der Juden des Alterthums" and the third volume of I. H. Weiss' History of Jewish Tradition), besides six other works of minor importance ("Ha-Asif," i. 24-37, 229-250). This work brought him into prominence. The wide learning, the critical acumen, the lucid style, and the sound reasoning displayed in these studies at once place him among the foremost living critics in Hebrew literature.