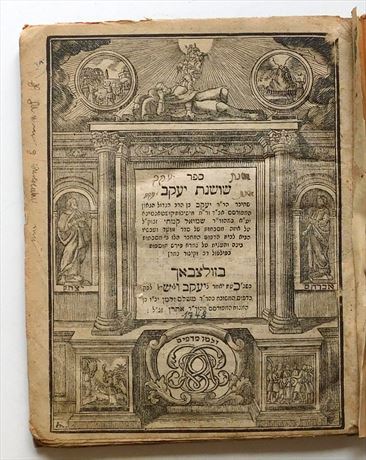 Only edition of these novella n tractates Betzah and Ta’anit by R. Jacob ben Samuel Kimhi. The title-page has an unusually attractive frame comprised of a depiction of Jacob reclining at the top with angels ascending and descending a ladder and to the side of that smaller inserts. For the borders are  images of Abraham and Isaac with additional small images on the right and left at the bottom. Between them is a mirror image monogram with the initials of the printer, Zalman Madpis, which can be read from either the right or the left. On the verso of the title-page are two approbations and next an apologia from R. Jacob Kimhi. He states that his aim was "to avoid casuistry and hairsplitting and establish the plain meaning of the Talmud in order to arrive at the law"; he sought to answer difficulties raised against the statements of Rashi and the Tosafists.

R. Jacob ben Samuel Kimhi (c. 1720–1800), talmudist and author in London. R. Jacob Kimḥi was born in Constantinople where his father R. Samuel, whose responsa are mentioned in the Masat Moshe of R. Moses Israel (ḤM nos. 50–51; Constantinople, 1734), was rabbi. At an early age Kimḥi undertook journeys through Europe, finally arriving in London, where he remained until his death. There he engaged in business but became well known through his extensive knowledge of Talmud. R. Ḥ.J.D. Azulai made his acquaintance in London and describes him as "an acute and erudite" scholar. His She'elah u-Teshuvah be-Inyan Bedikat ha-Re'ah ve-ha-Sheḥitah u-Vedikah be-London ("A Responsum on the Subject of the Slaughtering of Cattle and the Examination of their Lungs in London"; Altona, 1760) was occasioned by a dispute that broke out in London between 1755 and 1766 in connection with sheḥitah , which led to a schism between the Ashkenazi and Sephardi communities, in consequence of the accusations of the Sephardi shoḥet Ḥayyim Albahali (1755) that the slaughterers did not sufficiently supervise the examination of the meat after sheḥitah. Kimḥi published his work, in which he supported the view of Albahali, when the dispute was at its height.