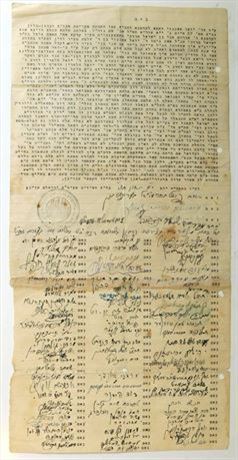 "Hetter Me'ah Rabbanim" for a Holocaust survivor to re-marry. The "Hetter" is utilized to relieve a man from the Herem de-Rabbenu Gershom againt bigamy. After the Bet Din has decided that a release from the herem should be granted, the matter is referred to 100 rabbis of three "countries" (Ozar ha-Posekim, EH 1:61, 9) for approval and, if so approved, the hetter takes effect. As a preliminary, the husband is required to deposit with the court a get for his first wife, together with an irrevocable authority for the court to have the get delivered to his first wife as soon as she is able and willing to receive it from an agent appointed by the husband at the request of the court. However, in the case where the hetter is given because of the first wife's insanity, it is customary to give her a new get when she recovers, rather than the one previously deposited with the court, as some doubt could be cast on the latter's validity, since it was the wife's insanity that made it impossible to deliver the get to her originally and there may therefore possibly be other legal objections to its validity. The deposited get is usually only delivered to her if she is in danger of becoming a deserted wife (see Agunah; Arukh ha-Shulhan, EH 1:26; Ozar ha-Posekim, EH 1:72, 30–31). Furthermore, the husband is also generally required to deposit with the court the amount of the wife's ketubbah in cash or provide adequate security (Bah, EH 119; Sh. Ar., EH; Beit Shemu'el 1, n. 23; Arukh ha-Shulhan, EH 1:25; Ozar ha-Posekim, 1:72, 23–24). Some authorities are of the opinion that the husband must also deposit with the court, or adequately secure in like manner, such sum as the court may determine to cover the wife's maintenance and medical expenses (Ozar ha-Posekim, EH 1:72, 29).

Among the signatories are:

R. Israel Isaac b. Netanal ha-Levi Reizman (1889-1969) was an erudite Talmudic scholar and a longtime member of the Bet Din Zedek in Jerusalem. R. Reizman was born and raised in the old city of Jerusalem and was a disciple of many hasidic rebbes and Sewphardic kabbalist. A widely respected posek, he wrote many responsa on contemporary issues, many printed in period rabbinical magazines.

R. Dov Berish b. Jacob Weidenfeld (1881-1966), Chief Rabbi of Tchebein (Trzebinia), Poland. He was born in Grymalov. His father died before he reached the age of bar mitzvah, and he was brought up by his elder brothers. In 1900, he married Yakht, the daughter of Israel Joseph Kluger of Trzebinia, where he lived for some time. He was a hasid of the rabbi of Husyatin and of R. David Moses of Chortkov. He was very devoted to R. Hayyim Halberstam of Zanz.,p> In 1918, he became dayan of Trzebinia and rabbi in 1923. There he established a yeshivah, Kokhov MiYaakov. During the Second World War, after taking refuge in Lvov, he was deported to Siberia in 1940 and lived for a time in Bukharia. In 1946, he settled in Israel, where his wife died in 1947. He then married Reizel, the daughter of R. Moses Lieberman of Kosice. He became the head of the yeshivah Hayyei Olam and then established his own yeshivah Kokhov MiYaakov. His principal work of Jewish law is titled "Dovev Meisharim (Pt. 1, Trebin, 1937; reprinted with Pt. 2, Jerusalem, 1958).

R. Chanoch Dov Padwa was born on 17 August 1908 (20 Av 5668 in the Hebrew calendar) in Busk, a small town in Galicia (now Ukraine). His father, Eliezer Wolf, named him after the rabbi of nearby Alesk. At five years old, he moved with his family to Vienna to escape the First World War. From an early age, Chanoch Dov was known as an "ilui" (Talmudic prodigy), studying at the yeshiva of Tzelem, Hungary and in the Belzer Shtiebel in Cracow, Poland. A lifelong Belzer Chasid, he travelled to Belz from Cracow in 1926, to participate in the funeral of the Belzer Rebbe, Rabbi Yissochor Dov Rokeach.

R. Mordechai Chaim Slonim of Tiberias. He was the grandson of the Yesod HaAvodah's brother, disciple of the Beis Avraham, successor of R. Shlomo David Yehoshua Weinberg. After the war, the Slonim Hasidim crowned R.i Mordechai Chaim Slonim (Kestilnitz) as their master and named him 'Reb Mottel Dayan'. Although he refused to officially be named Hasidic Master, in reality he led the Hasidim until his passing on the 12th of Tevet, 5714 – 1953. He was succeeded by R. Avraham Weinberg (the third), a son of R. Noach Weinberg and a great-grandson of the founder of the Slonim dynasty. During his 27 years of leadership he restored the glory of the Slonim dynasty that had been almost totally destroyed during the war and rebuilt it with love and devotion. R. Avraham was also one of the founders of the Orthodox educational network and served as a member of the Council of the Leading Rabbis. He passed away on the 12th of Sivan, 5741 – 1981. His commentaries were collected in the books 'Beis Avraham' and 'Nachal Eytan'.

R. Hannaniah Yom Tov Lippa Teitelbaum (Mayer; 1904-66), son in law of R. Joel Teitelbaum, Admor of Satmar, with his inscription and stamp on title. Son of R. Hanokh Heinokh of Sasov, he married, in 1924, his cousin Hayyah Rosa, the daughter of R. Joel Teitelbaum of Satmar, and he became the head of the Bet Din of Satmar. Later, he became rabbi in Samiah, where he was also principal of the yeshivah. During the Second World War, disguised as a beggar and sometimes as a soldier, he escaped to Romania. From 1944 to 1947, he lived in Jerusalem, where he established a yeshivah Yitav Lev and a girls' school Or HaHayyim in Bene Berak. In 1948, he moved to New York but visited Israel frequently. His wife died in 1954, and he remarried in Israel. In Adar 1963, he laid the foundation stone of a new sixty-dunam Kiryat Yismah Mosheh. In 1963, he became very ill and was forced to spend the next eighteen months hospitalized. He died and was buried in Tiberias.

R. Mordecai b. Gedaliah Moshe Goldman (1906-1979), Admor of Zevil. After being Admor in Zevil he emigrated to Erez Israel in 1926. He became rebbe in 1950 and established a yeshiva Bet Mordecai in Jerusalem. His views and opinions were voiced with rigor and forthrightness. He never used electricity, not even on weekdays, as it was produced with Sabbath desecration. He was buried on the Mount of Olives and succeeded by his son, R. Abraham.

R. Benjamin Joshua Silver (1915-2008), rabbi and talmudic scholar. An erudite scholar, prolific author, and lecturer. He received his training at the Novardik Yeshiva.

R. Aaron Jacob Klepfish (1880-1961), was born in Shtshutshin to his father R. Shmuel Zanvil the Chief Rabbi of Warsawe. He studied under the Avnei Nezer and was a prominent rav in Jerusalem. He served on the rabbinical committee of the Ozar haPoskim.

R. Samuel ha-Levi Wosner (1913 –2015) was a prominent rabbi and posek ("decisor of Jewish law") living in Bnei Brak. He was known as the Shevet HaLevi after his major work.  R. Wosner was born in Vienna, Austro-Hungary and studied in the Yeshivas Chachmei Lublin of Poland led by R. Meir Shapiro. He was also a student of R. Shimon of Zelicov who was the official supervisor at the Yeshiva. In Vienna, he had known and befriended the R. Chanoch Dov Padwa of Galicia. He married and immigrated to Erez Israel before the Holocaust and settled in Jerusalem, where he studied at the Dushinsky yeshiva. It was in that time that, in spite of his young age, he became a member of the Edah HaChareidis. When he relocated to Bnei Berak, upon the incentive of the Hazon Ish, R. Dov Berish Widenfeld of Tshebin, R. Isser Zalman Meltzer, and R. Yitzhak HaLevi Herzog, he established the Zichron Meir neighborhood and Yeshiva Chachmei Lublin, bearing the same name as the one in Lublin where he studied in his youth. He is the author of several works of Jewish law, including Shevet HaLevi ("The Tribe of Levi"), a comprehensive series of halakhic rulings and responsa on Jewish laws comprising ten volumes, and several other Torah books all bearing the same name. His halakhic opinions are widely quoted in many works on Jewish law both in Hebrew and English.