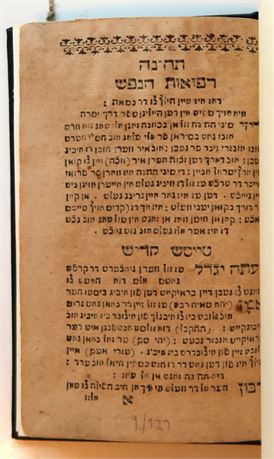 Not listed in bibliographies; no copy in major collections.

Prayers in Yiddish for women to recite daily, to merit long life, aliyah to Erez Israel, etc. Printed in continuous Vaybertaytsh font in single column. The place and period of printing were determined by the cataloger from the fonts and printing paper.  The work compares to many of the books printed by the Katz family of printers in Prague during the 16-17th centuries. The block wood captions are identical to other works by these printing houses. The paper and watermarks were likewise identified. Yiddish books in Prague (2nd version) by Shlomo Berger, has several comparative illustrations of period works.

Vaybertaytsh (Yiddish: װײַבערטײַטש‎, 'women's taytsh') or mashket (Yiddish: מאַשקעט‎), is a semi-cursive script typeface for the Yiddish alphabet. From the 16th until the early 19th century, the mashket font distinguished Yiddish publications, whereas Hebrew square script were used for classical texts in Hebrew and Aramaic, and "Rashi" script for rabbinic commentaries and works in Ladino. Mashket was used for printing Yiddish in the Old Yiddish literature period, and later as the primary script used in texts for and by Jewish women, ranging from folktales to women's supplications and prayers, to didactic works.

The general category of Tehinnah (Tehinnot) are a form of piyyutin which originated in the tahanun prayer for the fasts of Monday and Thursday. The term was also transferred to piyyutim for the selihot days, and indeed both the construction and subject of the tehinnah are similar to selihot. The tehinnah is usually said quietly, its subject being the relationship between G-d and the people of Israel. It is sometimes constructed in rhymed verses, sometimes in rhymed rhetoric, or even unrhymed, in the style of a bakkashah. In addition to Hebrew tehinnot, there were Yiddish-German ones for women published in small brochures from the beginning of the 17th century in Bohemia (Prague), Switzerland (Basle), Germany (Sulzbach, Fuerth, Roedelheim), and many towns of Russia and Poland. Occasionally tehinnot were added as appendixes to editions of the prayer book.