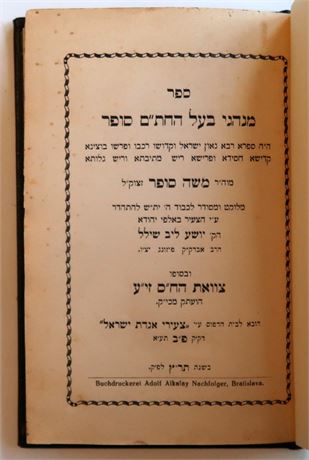 The customs of the renowned R. Moses Sofer, who was called the Hatam Sofer, by Yaakov Reisfeder (b. 1890). This volume is part of a series about the lives of the great thinkers and Geonim. It includes a foreword by Hillel Zeitlin (1871–1942) , a Yiddish and Hebrew writer who edited the Yiddish newspaper Moment, among other literary activities.

R. Moshe Sofer was born on September 14, 1762 in Frankfort, Germany. He was a child prodigy and was already an advanced Talmudic scholar at the age of seven. At the age of twelve, R.Sofer was already a student of R. Noson Adler, one of the greatest sages of that period.

On May 6, 1787, R. Sofer married Sara Jerwitz and settled in her hometown of Prossnitz. In 1794, R. Sofer took his first rabbinical position in Dresnitz. Five years later he became the rabbi of Matesdorf, Hungary. In 1801, the chief rabbi of Pressburg, R. Meshulam Igra, a giant in a time of great men, passed away. For five years, the community of Pressburg searched for someone capable of succeeding this great man. Ultimately, R. Moshe Sofer was invited to take this prestigious position and, in 1806, R.Sofer became the Chief Rabbi of Pressburg. He held this position for the rest of life. While his first few years in Pressburg were very productive, trouble soon fell upon Rabbi Sofer and the city of Pressburg. In 1807 there was a great fire which left many Jews homeless. Then, in 1809, Pressburg was bombarded and invaded by the army of Napoleon. Life within Pressburg became extremely difficult and the community suffered terribly. As the leader of the community, it fell upon R. Sofer to lead relief efforts and, after the invasion ended, the rebuilding of the Jewish community. The invasion was followed by two more fires in the years 1810 and 1811. Finally, in 1812, R. Sofer suffered the loss of his wife, Sara. At the age of 50, R. Sofer was left a childless widower.

Fortunately this situation did not last long. By the end of that year, R. Sofer had remarried to Saril, the daughter of R. Akiva Eiger. (Rabbi Eiger was one of the leading rabbis of that time and his name is a household word amongst knowledgeable Jews to this day.) With Saril, R. Sofer was ultimately blessed with eleven children. R. Sofer spent the rest of his life leading his community and teaching Torah to his students. He was accepted as the leading halachic authority of his time. The only pall on R. Sofer's life at this time was the constant efforts of those opposed to true Judaism to lessen the level of religious observance in Pressburg. These efforts resulted, among other things, in an attempt, thankfully unsuccessful, to have the government forcibly close down R. Sofer's yeshiva. R. Sofer became one of the leading opponents of these secularists.

R.Sofer passed away in 1839 and was succeeded in Pressburg by his son, R. Avraham Sofer. After his death, his family published several books of his collected writings and speeches. These books are standard references in Jewish studies to this day. Perhaps the most important book was his collected halachic decisions. This book, titled Chasam Sofer (Seal of the Scribe), was and is very popular. Thus R. Sofer is known today as the Chasam Sofer.

www.jewishvirtuallibrary.org/jsource/biography/chasamsofer.html; Bibliography of the Hebrew Book 1470-1960 #000169986