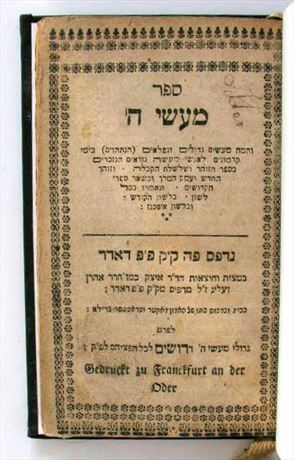 Compendium of tales from the Zohar, the works of R. Isaac Luria, and from other kabbalistic books consistent with the title Ma’asei HaShem (The Deeds of the Lord) compield by R. Simeon Akiva Baer ben Joseph. The title page states that it is great and wondrous deeds from earlier times, performed for awesome men of deeds, noted in the Zohar and Shalshelet ha-Kabbalah, the Zohar Hadash, Emek ha-Melekh, andother holy works, told in any language, in Hebrew, and in Yiddish. An introduction follows, then the text, which is in a single column ion two parts. The top of the page is in Hebrew in square letters, and below it in Yiddish in Vayberteitsch.

The compiler, R. Simeon Akiva Baer ben Joseph (Simeon Akiva Baer; 17th century), was a talmudist and kabbalist. He was among the Jews who were expelled from Vienna in 1670. He thereafter wandered through the whole of Bohemia and parts of Germany, earning his living by teaching Talmud and delivering lectures in the synagogue on the Sabbath. He interrupted his travels when he was elected rabbi of Burgpreppach, in Bavaria. There he wrote a kabbalistic commentary to the daily prayers entitled Avodat ha-Bore ("The Worship of the Creator," 1688), comprised of five parts, each beginning with one of the letters of his name (A.K.I.B.A.). This work met with success and was published three times. A new commentary for Sabbath and holidays was added to the third edition. Akiva interrupted his travels a second time to become rabbi of Zeckendorf, near Bamberg. There he met the leader of the community, R. Seligman Levi Meir, with whom he composed a short encyclopedia to Midrash Rabbah, which was published under the title Pi Shenayim ("A Double Share," 1702). He remained in Zeckendorf six years. From there R. Akiva was called to Schnaitach, which at that time had a large Jewish community. There he was imprisoned during a riot. After his release, R. Akiva became rabbi of Gunzenhausen and, finally, second rabbi of Ansbach. He was the author of two works in Yiddish, which had even a wider circulation than his Hebrew works, namely: Abbir Ya’akov ("The Mighty [God] of Jacob," 1700), a collection of legends from the Zohar and from the Midrash ha-Ne’elam about the patriarchs, based on the first 47 chapters of Genesis; and this work, Ma'asei HaShem.