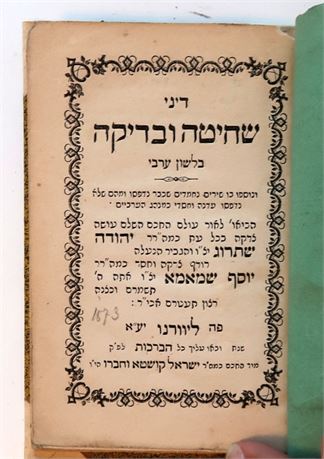 Shechita - procedure, which must be performed by a shochet, is described in the relevant texts only as severing the wind pipe and food pipe (trachea and esophagus). Nothing is mentioned about veins or arteries. However, in practice, as a very long sharp knife is used, in cattle the soft tissues in the neck are sliced through without the knife touching the spinal cord, in the course of which four major blood vessels, two of which transport oxygenated blood to the brain (the carotid arteries) the other two transporting blood back to the heart (jugular veins) are severed. The vagus nerve is also cut in this operation. With fowl, the same procedure is followed, but a smaller knife is used. A special knife is used, that is very long; and no undue pressure may be applied to the knife, which must be very sharp. The procedure may be performed with the animal either lying on its back (שחיטה מוונחת, shechita munachat) or standing (שחיטה מעומדת, shechita me'umedet).

In the case of fowl (with the exception of large fowl like turkey) the bird is held in the non-dominant hand in such a way that the head is pulled back and the neck exposed, while the cut made with the dominant hand. The procedure is done with the intention of causing a rapid drop in blood pressure in the brain and loss of consciousness, to render the animal insensitive to pain and to exsanguinate in a prompt and precise action.

Bedikah - The carcass must be checked to see if the animal had any of a specific list of internal injuries that would have rendered the animal a treifah before the slaughter. These injuries were established by the Talmudic rabbis as being likely to cause the animal to die within 12 months time. Today all mammals are inspected for lung adhesions (bedikat ha-reah "examination of the lung") and other disqualifying signs of the lungs, and most kosher birds will have their intestines inspected for infections. Further inspection of other parts of the body may be performed depending on the stringency applied and also depending on whether any signs of sickness were detected before slaughter or during the processing of the animal.