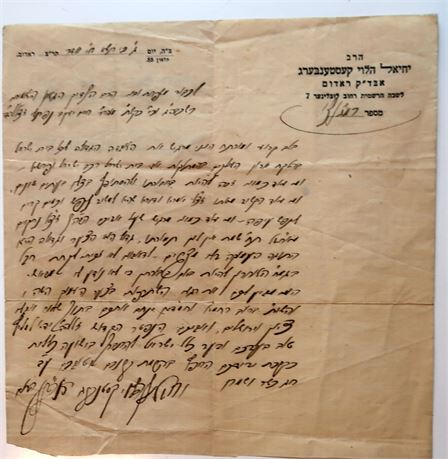 Letter by R. Yehiel Kestenberg (1888-1942),  Radom's last Rabbi. He was ordained by the Divrei Malkiel, R. Moshe Nachum Yerushalmski and others. In 1913 he was appointed chief dayan in Radom, and in 1914 became rabbi of the city. The controversy surrounding his appointment accompanied the community throughout the period between the two world wars. In 1926, most of the community voted for R. Yitzchak Steinberg, but the local government authorized the appointment of R. Kestenberg. This controversy continued for dozens of years.

R. Kestenberg was among the thirty thousand Jews of Radom rounded up for “deportation” on August 16, 1942. If he was ever guilty of any wrong-doing he completely vindicated himself on that day when he attacked, with his bare fists, a German storm-trooper who had just killed a child. R. Kestenberg died a martyr's death.