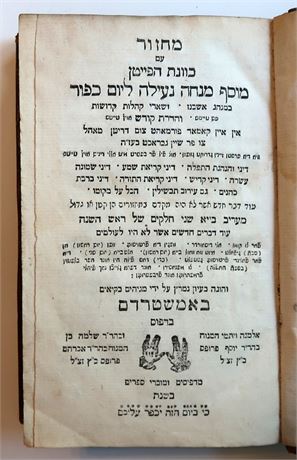 Liturgy for Yom Kippur, Part II following the rites of Ashkenaz with Judeo-German translation in Vaybertaytsh.

Vaybertaytsh became associated with devotional women's literature. As a result of their not being present in the yeshivot, women were usually fluent only in the Yiddish (the vernacular among Ashkenazi Jews), and literate only in Yiddish, if at all. Thus early religious works in Yiddish were mostly created for women's edification. The Tseno Ureno was a Yiddish-language prose adaptation of the Chumash, its corresponding Haftarah portions, and the Megillot. It dates to at least 1622 and has been published in block print and vaybertaytsh. Similarly, tehines were supplicatory prayers written in Yiddish (usually for women) rather than in Hebrew and Aramaic, in contrast to the normative Jewish liturgy. They proliferated in the 16th and 17th centuries, and continued to be written and published, usually in vaybertaytsh, into the early- to mid-20th century.