Only Edition - No copy NLI or other major collections 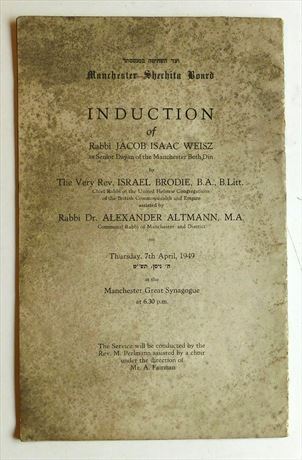 No copy NLI or other major collections

Induction of R. Isaac Jacob Weiss as Senior Dayan of the Manchester Bet Din on Thursday, April 7, 1949. The service began with a prayer for the British Royalty, prayer for the newly formed State of Israel, followed by several speeches, recitation of Psalms, and kaddish.

R. Isaac Jacob Weiss (1902-–1989), Chief Dayyan of the Edah Haredit of Jerusalem. Born in Dolina, Poland, R. Weiss studied in various yeshivot and became head of the Yeshivah of Munkacs (Mukachevo; then Czechoslovakia, now Soviet Ukraine), at the age of 20. In 1929 he was appointed dayyan of the important Jewish community of Oradea.

During World War II, he and his family escaped deportation and found refuge in Romania. Returning after the war, he became the spiritual leader of what was left of the community and took a prominent part in its reconstruction. In 1949 he immigrated to Britain where he was appointed senior dayyan of the Manchester and Salford Jewish Community, and was soon recognized as an outstanding halakhic authority. His first halakhic work, Divrei Yizhak, appeared in 1941. From 1955 successive volumes of his responsa (Minhat Yizhak) began to appear, and a six-volume edition was published in Jerusalem (1973–75), including homiletic material, which also appeared in a separate volume under the same title. An appendix to the first volume of the second edition, titled Pirsumei Nisa (pp. 265 ff.), gives a moving description of life under the Nazi-dominated Hungarian regime and of his miraculous escape into Romania. In 1968 R. Weiss was appointed head of the bet din of the ultra-Orthodox Ashkenazi community (Edah Haredit) of Jerusalem.