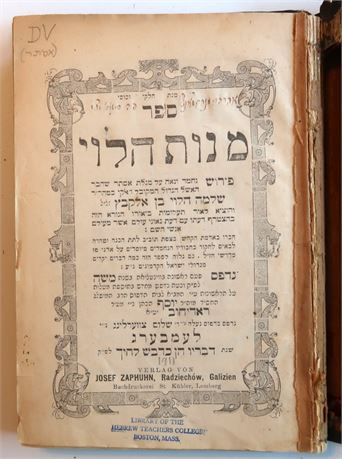 With an extensive list (16pp) of financial supporters from Poland and Galicia. The title is followed by two pages of approbations which include many Hasidic masters.

The Scroll of Esther with two commentaries by R. Solomon b. Moses ha-Levi Alkabez (c. 1505–1584), kabbalist and mystical poet, composer of the Sabbath hymn "Lekhah Dodi" ("Come, my beloved"). In 1529 he decided to settle in Erez Israel. In the course of his trip he stayed briefly in Adrianople. Here, a group of kabbalist ascetics asked him to instruct them in the spiritual life and in his methods of worship of G-d. At Nikopolis, he was probably in contact with R. Joseph Caro, who greatly appreciated Alkabez' knowledge of Kabbalah. R. Alkabez states that while they were both studying the Torah on the night of Shavuot, the maggid appeared to R. Caro. They therefore established the custom of staying awake on the night of Shavuot to study the Torah. The custom, which became widespread, is known as "Tikkun Leil Shavu'ot." R. Alkabez preached wherever he went, and R. Samuel b. Israel de Uceda, R. Eleazer Azikri, R. Abraham Galante, R. Elisha Galileo, and R. Isaac Gershon were among those who listened to his preaching and quoted from his sermons. R. Alkabez probably arrived in Safed in 1535. Very little is known of his life there. His signature on rulings and documents is rarer than that of any other important Safed scholar. Nothing is known about his attitude to R. Isaac Luria. It seems that he was head of the Meron yeshivah and it is almost certain that he was an officiating rabbi in Safed. A prolific author, he wrote some works on the Bible, and others of a kabbalistic nature. Many of his manuscripts were stolen when he died. It is not clear whether this was done during persecutions, or by other authors. None of his purely kabbalistic works was printed or preserved in manuscript.

R. Alkabez, in order to understand the secrets of the Zohar, used to go out with his students to pray and meditate on the graves of zaddikim. This practice was called gerushin ("banishment"). During these gerushin-peregrinations, they concentrated on rousing their contemplative powers spontaneously and without any previous preparation. R. Alkabez had a powerful gift for stimulating spiritual revivals and mystical life. His best-known disciple was R. Moses Cordovero (who married Alkabez' sister). More than any other scholar in Safed and in Turkey, he made extensive use of the kabbalistic writings of R. Eleazar b. Judah of Worms, particularly Sha'arei Binah and Ma'aseh Roke'ah. His attitude toward the sciences was negative. He often quoted commentaries of latter-day authors, some of whom lived close to his own times, as well as his older contemporaries. Among these were the treatises on the Bible by R. Joseph Gakon and R. Joseph Jabez he-Hasid. He also quoted from his father R. Moses Alkabez, his uncle R. Joshua, R. Joseph Taitazak, and the great halakhist R. Jacob Berab (c. 1474–1541).

A collection of R. Alkabez' prayers has been preserved (Moscow, Ms. Guenzburg 694, and Paris Ms. 198). They contain supplications, confessions, admonitions, and songs of praise, both in the form of hymns and of meditations in the style of Gabirol's "Keter Malkhut." R. Alkabez probably initiated the custom practiced by the kabbalists of Safed of going out to the fields to welcome the Sabbath with a recital of his hymns. His "Lekhah Dodi" achieved unparalleled popularity, and is sung in Jewish communities at Kabbalat Shabbat. "Lekhah Dodi" was accepted soon after it was written and was introduced into the prayer book in 1584 (Sephardi version, Venice).

His works include: Ayyelet Ahavim (1552, on the Song of Songs); Shoresh Yishai (1561 or 1566 on Ruth); Divrei Shelomo on the Minor Prophets; Ne'im Zemirot on Psalms; Pizei Ohev on Job. The titles of his other works on the Bible are not known. His sermons are also found in the book Or Zaddikim. His other writings are all kabbalistic: Ozar Nehmad, Amarot Tehorot, on the Sefirot and some sayings of the Zohar; Appiryon Shelomo, Beit Adohai, Beit Tefillah constitute "a comprehensive interpretation of all the prayers of the year"; Berit ha-Levi, a commentary on the Passover Haggadah in both the literal and the kabbalistic manner; Lehem Shelomo, the devotional rules of the meals, in the kabbalistic manner; Mittato shel Shelomo on the mystical significance of sexual union; Sukkat Shalom, Avotot Ahavah, Shomer Emunim, prayers and litanies.