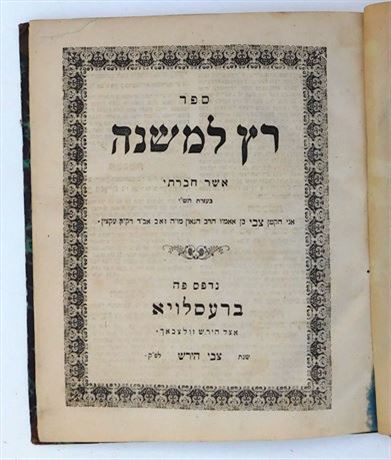 Only edition of this commentary on Mishnayot by  R. Tzevi {Hirsch] ben Ze’ev Klausner. The title-page is followed by eight approbations, including one from R. Meir Leibush Malbim and then the names of the promeratim, that is, the contributors who made publication possible. There is an introduction by the author and then the commentary, given by chapter. Rats le-Mishneh is a comprehensive, rare explanation of Mishnayot.

R. Tzevi Hirsch ben Zev Klausner (1802–1887) was a rabbi and author. R. Klausner received his education from his father, R. Ze’ev Wolf of Rawicz (1761–1861), a scholar, who from 1804 to 1811 was rabbi of Oborniki, and from 1811 until his death, of Exin (Kcynia), where he was head of a yeshivah. One of four children, Ẓevi Hirsch suffered greatly during his lifetime, wandering from place to place. After the successive deaths of two wives, he married a third time and settled in the small town of Mechisko. There, isolated from all intellectual contact, he published his works. Raẓ le-Mishnah (1857), on the commentators to the Mishnah, attempts in particular to resolve the well-known difficulties in the Mishnah raised by Akiva Eger, and has a moving introduction by Klausner to explain his "impertinence." He added supplements to this work, one entitled Ta ha-Raẓim (1864), and two poems by his brothers, Mordecai Isaac and Jacob. The books received approbations, particularly from the rabbis of Germany.