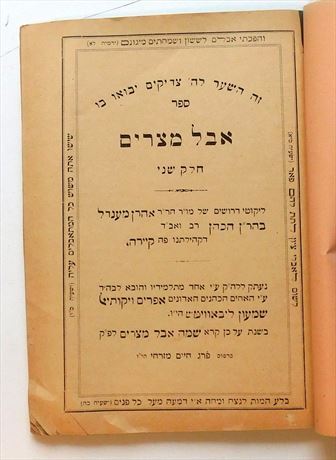 Work by the Chief Rabbi of Cairo, R. Aaron Mendel Cohen (1866-1927). R. Cohen was born in Tiberius and educated there, received ordination from the Tiberius rabbinate. An erudite scholar, many of his works have been printed. Among his noted works are Kuntres Agunot (Cairo 1924) responsa regarding an abandoned wife; Semikhat Hakhamim, Sefer Ha'Agudah (Cairo 1911) attempt to resurrect the anointment of rabbinical judges in Erez Israel; and many others.

Hebrew books from Cairo are few in number and rare. The first Hebrew printing press in Cairo, which was also the first one in the whole Middle East outside of Palestine, was founded in 1657 by Gershom ben Eliezer Soncino . He was the last printer of a famous family of printers; he had previously worked in his father's press in Constantinople. Two of his books printed in this year are known: Refu'ot ha-Talmud, a book of remedies, and Pitron Ḥalomot ("Interpretation of Dreams"), attributed to R. Hai Gaon . A second printing press was founded in Cairo in 1740 by Abraham b. Moses Yatom, who had also previously worked as a printer in Constantinople. He printed only one book, the first edition of Ḥok le-Yisrael, edited by R. Isaac Baruch of Cairo. This work was later reprinted in many editions. The renewal of Hebrew printing in Cairo took place in 1905, and after that year there were five Hebrew printing presses. They were principally used for commercial purposes, with the printing of books as a secondary activity. Up to World War II, they printed over 50 books, most of which served the needs of the Egyptian communities or were the works of authors living in Egypt.