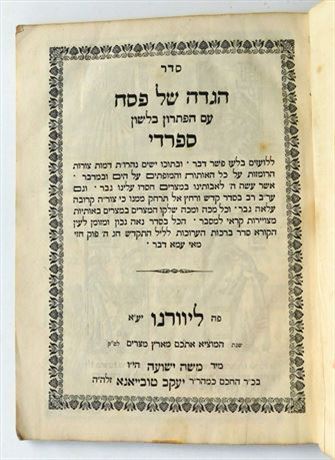 Ladino or Judeo-Spanish is the spoken and written Hispanic language of Jews of Spanish origin. Over the centuries, various names have been given to this language composed of ancient Spanish dialects: Romance, Ğudezmo, Spaniolish. The widespread view that the term "Ladino" is only applicable to the "sacred" language of Bible translations and prayers, whereas the other names are reserved solely for the spoken language, seems hardly tenable. Moreover, the theory that Ladino originated as a specifically Jewish language (as distinct from the dialects spoken in Spain) as early as the 13th or 14th century still lacks serious and sufficient proof. There is no doubt that Jews interspersed their dialects with words or expressions borrowed from Hebrew (particularly terms and concepts connected with religion and ethics), and that they preserved archaic words and obsolescent forms longer than other people. However, it was only after the Spanish Expulsion of 1492 that Ladino began to be a specifically Jewish language. Although the Jews had been ejected from the Iberian Peninsula and thus cut off from its language while this was still in the process of evolution, they preserved the Spanish and Hispanic dialects that had been spoken and written before Cervantes and the Golden Age, and which basically reflected the phonetics, morphology, and syntax of the 14th and 15th centuries. A gap, wider or narrower according to the country to which the refugees fled, began to appear between the written and spoken language on the one hand and the language of secular and rabbinical literature on the other. The language of Bible translations and prayers, which remained more resistant to the words, expressions, and syntactic patterns of the local tongue, became, in the course of the centuries, less and less comprehensible to the masses. The literature written in Ladino is not to be confused with that produced in Spanish by the western Sephardi communities, mainly that of Amsterdam. In contrast to the vast majority of the observant Spanish Jews who were exiled to North Africa and the Ottoman Empire in the 15th century, the Marranos , assimilated into Spanish culture and more integrated within Christian society, left Spain gradually during the 16th and even the 17th and 18th centuries, many of them settling in Western Europe. These elements maintained direct contact with the civilization of their old country. Not only are their religious, philosophical, scientific, and literary works not written in Ladino, but they express an entirely different spirit from that found among the "Oriental" Sephardi thinkers and writers. The Ladino romancero occupies a place of its own in the literature and everyday life of the Sephardim. When they left Spain, the Jews retained in their oral tradition innumerable "romances" – popular and traditional Spanish ballads – which had been widely diffused throughout the country in the course of the 14th and 15th centuries. (For musical tradition in the romancero, see below.) The melodies that accompanied these romances and made them easier to memorize also contributed to their preservation and to their transmission, from the 16th to 20th centuries, through all the communities of the eastern Sephardim and North Africa. Since the romancero was a "popular" genre, it hardly existed in western Sephardi centers. The Ladino romancero is largely a continuation and an adaptation of the Spanish romancero of both the Middle Ages and the Renaissance. It includes some romances which are still to be found in collections of Spanish poetry and others which did not survive in the Iberian Peninsula or which are variations or adaptations, as well as many original romances and songs of later composition. The general subject matter of the Ladino romancero has sometimes been enriched by new Spanish romances composed in the late 15th and 16th centuries. The subject matter varies according to the distance of a given Sephardi community from Spain; thus the romances of North Africa differ considerably from those of the Ottoman Empire. The common characteristic, however, is what may be called the "dechristianization" of the traditional romancero. Jews tended to eliminate from the romances any elements which implied adherence to Christian beliefs and ceremonies. Only a few North African romances imported from the Peninsula at a much later date still retain specifically Christian motifs or images. Lapses of memory or interpolations sometimes resulted in either a muddled or amplified version of a traditional romance. The newly composed romanceros are on the whole looser in form and inferior in quality to the traditional romances. Since the romances were transmitted orally, the Ladino romancero has only comparatively recently acquired a written form which is still far from complete. However, it already represents a very rich and valuable corpus of poetry and folklore.