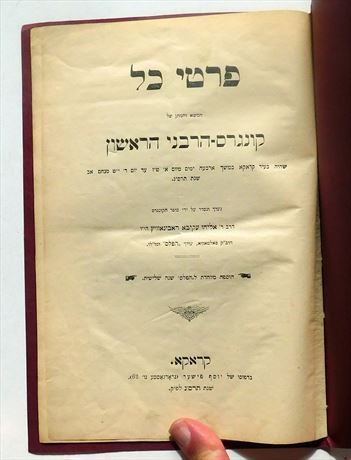 Transcript of the first Rabbinical Congress, held in Cracow in 1903 by R. Eliyahu Akiva Rabinowich (Rabinowitsch) (1861–1917). Born in Silale, Lithuania, Rabinowich studied in various Lithuanian yeshivot, including Eisiskes, where he obtained semikhah, at the same time becoming proficient in secular studies and foreign languages. After marriage he engaged in business, but was unsuccessful, and on his father's death in 1888 he succeeded him as rabbi of Pyantiza. In 1892 he was appointed as rabbi of Kinishin but following a communal dispute he was expelled by the authorities, who were informed that he had no right of residence there. In 1893 he was appointed rabbi of Poltava, where he remained until his death.

R. Rabinowich became famous as a result of his attitude toward Zionism and the resulting controversy. Influenced by R. Samuel Mohilewer, he attended the first Russian Zionist Conference in Warsaw in 1898 and was a delegate to the Second Zionist Congress in Basle in the same year. Like many other rabbis, Rabinowich was uneasy about associating himself with Zionism, and the parting of the ways came over the question of “Culture.” Rabinowich, like R. J. L. Zirelson, objected to the Zionist Movement engaging in culture and education, urging that it confine itself to political and economic activity, and that if it did deal with such matters it should at least be under rabbinic supervision. When his proposal was rejected, the disappointed Rabinowich, on his return to Poltova from the Congress, launched a vehement attack against the Zionist Movement. In 1899 he published a pamphlet, Ziyyon be-Mishpat, which raised a storm in both the Zionist and the Orthodox world. He was attacked by both the secular elements in the Zionist Movement (Ha-Meliz. 1899, 218–9) and its Orthodox members, such as Rabbis S. J. Rabinowitz (ibid., 153–73) and David Solomon Slouschz (Mikhtav le-David, 1899). A bitter personal note was injected into the controversy. Rabinowich replied in his pamphlet Ve-Anta Bi Zidkati (1899). Thereafter he became one of the leading opponents of Zionism, and was associated with the Lishkah Shehorah (see Zionism: In Russia) which had its headquarters in Kovno (Kaunas). From 1901 to 1905 he edited Ha-Peles and from 1910 to 1914 Ha-Modi’a which were the main vehicles for his polemics. In 1912 Rabinowich participated in the founding conference of the Agudath Israel in Kattowice. He also participated in various rabbinical conferences, including the one in Cracow in 1903, whose proceedings he edited. Among his literary works were Hesed li-Meshiho, a commentary on the Book of Ruth. The first edition (1898), unlike later ones, also included halakhic responsa. His Son, J. Z. Rabinowich, published a selection of his sermons (1943).