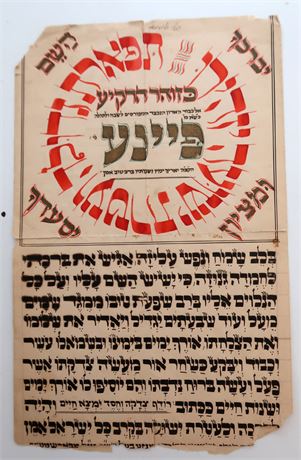 Certificate in Hebrew and German on verso, to Philip Feine of Hamburg for a generous donation. The document is signed by the Rabbi a descendant of the Sakh, R. Shabbtai Kohen.

Barsczkow (Borshchev) is a town, in the region of Ternopil, about 105 km southeast of it, 14 km west of Skala, on the left bank of the Nichlava, a tributary of the Dnister. First mentioned in 1456. Chartered in 1629. Jews mentioned in 18th century documents. In 1648 about 200 Jews were killed there. It was also occupied by the Axis troops in July 1941 and several mass executions of Jews were carried out in the town. In April 1942 a Borshchiv Jewish ghetto was established here. Between spring and summer of 1943, approximately 400 Jews were sent to the Ivanovka camp and more than 2,300 Jews were shot in the Jewish cemetery.