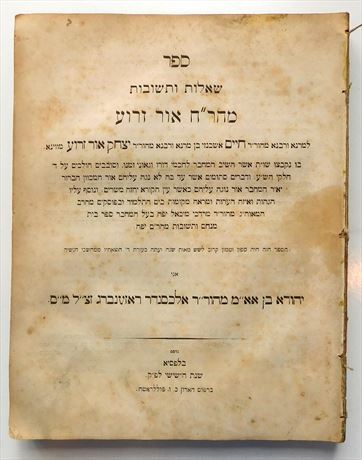 Two-hundred-sixty-one responsa by the rishon (early sage) R. Hayyim ben Isaac Or Zeru’a. The author was the son of and the book is entitled after R. Isaac b. Moses of Vienna (Or Zeru’a). The title page informs that this collection of responsa were sent to the leading sages of the time and cover all four parts of the Shulhan Arukh. The front matter consists of an introduction from R. Judah ben Alexander, who brought the book to press; R. Mordecai Michael ben Menahem Mendel Jaffe; and then glosses by R. Jaffe.

R. Hayyim (Eliezer) ben Isaac "Or Zaru'a" (late 13th century) was a German rabbi and halakhic authority, called "Or Zaru'a" after the famous work composed by his father, R. Isaac b. Moses of Vienna. R. Hayyim was orphaned in his early youth. His principal teacher was R. Meir b. Baruch of Rothenburg, whose opinions he frequently cited. He also studied under such eminent scholars as R. Asher b. Jehiel and R. Hayyim b. Moses of Wiener-Neustadt. His permanent places of residence were Regensburg, Neustadt, or Cologne and he is said to have spent some years in France. Hayyim is considered one of the last of the tosafists. While his father, R. Isaac b. Moses, the author of the Or Zaru'a, is mentioned numerous times throughout the tosafot commentaries, R. Hayyim is only mentioned in the Tosafot Yeshanim, a variant version of the tosafot commentaries.

R. Hayyim's responsa are especially valuable for the light they shed on the people, places, and events of his time. Thus he mentions (no. 110) a rabbinical synod which he attended at Mainz in about 1288, in which one of the matters discussed was the taxes imposed on the Jews by Rudolf of Hapsburg. In the same responsum he refers in passing to R. Meir of Rothenburg's imprisonment (see also no. 164). Some of the responsa provide important source material on Jewish-Christian relations in the 13th century. Most of R. Hayyim's decisions are based on those of the French and German halakhic authorities, particularly on his father's Or Zaru'a. His abridged version of that codification, which he entitled Kizzur Or Zaru'a (or Simanei Or Zaru'a), summarized each section of the original work, omitted the legal discussions, and included his own views together with those of other scholars. From the many references to the Kizzur Or Zaru'a in German rabbinic literature of the 14th and 15th centuries it is clear that his abridgment enjoyed long popularity. An important aspect of Hayyim's work is the lively correspondence he conducted with many of his contemporaries. It is believed that he addressed inquiries even to the Spanish scholar R. Solomon b. Abraham Adret (Resp. Rashba, pt. 1, no. 572). Knowledge about the life and teaching of Hayyim "Or Zaru'a" derives from a book of responsa of which he was the author and a book of homiletic sermons (derashot) which was published under the title Derashot MHR"H, Halakhic Decisions of Rabbi Hayyim Or Zaru'a, first ed. according to Parma MS Moscow by Yitzhak Shimshon Lange (Jerusalem, 1973).

The book of Derashot contains homiletic treatises on 25 portions of the Torah, summing up various laws and customs. Both his responsa and homiletic treatises contain a wealth of material throwing light on relations between Jews and their gentile surroundings. He endeavors throughout to provide the Jews of Ashkenaz with guidance in their dealings with the hostile gentile environment. From the copious historical material found in his responsa, much can be learned about the communities (Kehillot), their internal organization, leadership, rights, and obligations. We also learn how he grappled with the challenges and dangers of living as a Jew in the midst of a medieval, gentile society.