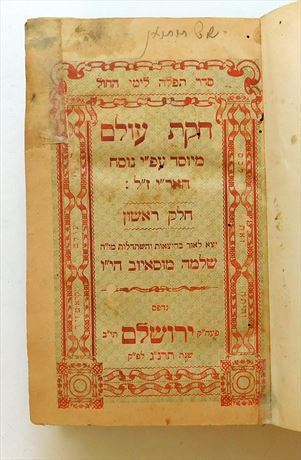 Part 1 (of 6), only edition of this comprehensive mahzor for year round weekday prayers according to the rite of the Ari (Nusah Ari). This volume is volume one of the entire work, printed in six volumes over several years. It was printed at the expense of R. Solomon Musayof.

Nusach Ari means, in a general sense, any prayer rite following the usages of R. Isaac Luria, the AriZal, in the 16th century, and, more particularly, the version of it used by Habad Hasidim. In 1803, R. Schneur Zalman of Liadi, the founder of Habad Hasidism, published a prayer book that was arranged according to Nusach HaAri. This prayer rite has been used ever since by Habad Hasidim. The Ari and his immediate disciples did not themselves publish any prayer book, though they established a number of characteristic usages intended to be used as additions to the existing Sephardic rite. After R. Isaac Luria's passing in 1572, there were various attempts, mostly by Sephardic rabbis and communities, to publish a prayer book containing the form of prayer that he used: an example is the Siddur of R. Shalom Sharabi. Many of these remain in use in Sephardic communities. Prayer books containing some version of the Sephardic rite, as varied by the usages of the Ari, were also in use in some Kabbalistic circles in the Ashkenazic world in preference to the traditional Ashkenazic rite. In particular, they became popular among the early Hasidim. These prayer books were often found to be inconsistent with the Ari Zal's version, and served more as a teaching of the kavanot (meditations) and proper ways to pray rather than as an actual prayer book. Then, in the 18th century, R. Schneur Zalman decided to undertake the task of compiling a prayer book which amalgamated Hasidic teachings (including his own) with what he considered to be the most correct version of the Lurianic Sephardic rite. The difference can be seen when comparing Sephardi prayer books containing Lurianic usages with Hasidic versions. The Alter Rebbe, as R. Schneur Zalman is commonly known, researched approximately sixty different versions of siddurim so as to come to the most correct version of the liturgical text. In 1803 the Alter Rebbe had the siddur published, and it was released in two volumes to the public. The new siddur was received with great excitement, and it was reprinted three times within the first ten years. While much of R. Schneur Zalman's siddur is based on the Nusach Ari as composed by the Ari Zal himself, it is also compiled based on rulings and compositions from various other sources. The Alter Rebbe acknowledged this by entitling his work "Al Pi Nusach Ari," meaning "according to the version of the Ari". It differs from the other versions of the Ari Zal's siddur by incorporating some features of the Ashkenazic rite. It also contains some meditations from the Siddur of R. Shalom Sharabi, but very much condensed compared with the original. Rabbi Schneur Zalman's Siddur is used today by Habad Hasidim (Lubavitch), and the current edition is called Siddur Tehillat Hashem. Many of the other siddurim that are based on the Ari Zal's siddur are categorized under the title of Nusach Sefard, and are used by other sects of hasidim.