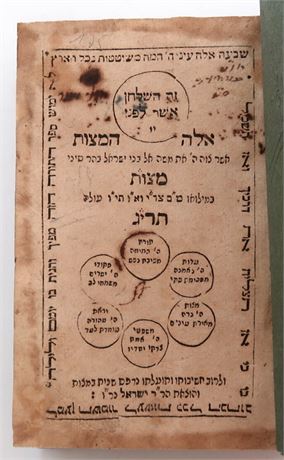 On the numeration of precepts in Maimonides’ Sefer ha-Mitzvot, on the Oral Law, and on Kabbalah by R. Moses ben Jacob Hagiz, (1672–?1751), scholar and kabbalist, was among the leading opponents of Shabbateanism in the eighteenth century. Born in Jerusalem, he studied with his grandfather, R. Moses Galante. R. Hagiz visited Egypt and then Italy, where in 1704 he published his father’s Halakhot Ketannot. He traveled by way of Prague to Amsterdam where he made contact with R. Zevi Hirsch Ashkenazi, then rabbi of the Ashkenazi community, and collaborated with him in an energetic struggle against Shabbateanism and its secret adherents. When in 1713 Ashkenazi and Moses refused to retract the excommunication of the Shabbatean Nehemiah Hayon, a fierce quarrel broke out between them and the elders of the Portuguese community. In 1714 when R. Ashkenazi resigned his rabbinical office and left Amsterdam, R. Hagiz was compelled to leave with him. He went first to London with Ashkenazi, there continuing the fight against Hayon and his allies, and then to Altona, home of R. Jacob Emden, R. Ashkenazi’s son, where he resumed the struggle against Shabbateanism. Among those R. Hagiz attacked are Michael Abraham Cardoso and even R. Jonathan Eybeschuetz, and he took the offensive against R. Moses Hayyim Luzzatto, inducing the rabbis of Venice to excommunicate him. In 1738 R. Hagiz returned to Erez Israel and settled in Safed. He died in Beirut and was taken to Sidon for burial. R. Hagiz’s other works include Leket ha-Kemah, novellae on the Shulhan Arukh, O. H. and Y. D. (Amsterdam, 1697), and E. ha-E. (Hamburg, 1711); the ethical treaties Zerror ha-Hayyim and Mishnat Hakhamim (ibid., 1728–31 and 1733 respectively); Elleh ha-Mitzvot (Amsterdam, 1713), on the numeration of precepts in Maimonides’ Sefer ha-Mitzvot, on the Oral Law, and on Kabbalah; Sefat Emet (Amsterdam, 1697); and Parashat Elleh Masei (Altona, 1738), on the sanctity of the land of Israel.