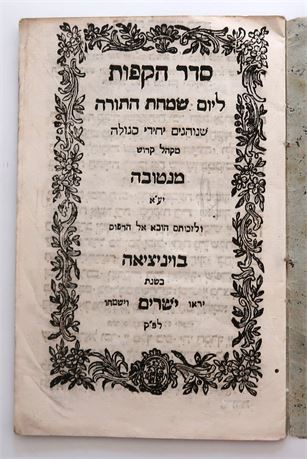 Special liturgical compositions for the Simhat Torah (the last day of the holy days begun by Sukkot) ceremony of dancing with the Torah following the custom and rite of R. Haim Joseph David Azulai (HIDA). During the celebrations all the Torah scrolls are removed from the Ark and the bimah ("pulpit") is circled seven times (hakkafot) with song and dance.

R. Hayyim Yoseph David Azulai (known by his Hebrew acronym HIDA, 1724–1806), halakhist, kabbalist, emissary, and bibliographer. The Hida was born in Jerusalem; he was descended on his father's side from a prominent family of rabbis and kabbalists from Spain while his mother was a daughter of Joseph Bialer who had gone to Erez Israel with R. Judah Hasid in 1770. He studied under some of the outstanding Jewish scholars of his age including R. Jonah Navon, R. Isaac ha-Kohen Rapoport, and R. Hayyim ibn Attar. R. Azulai attained early eminence in Jewish studies and was regarded by the Jewry of the Ottoman Empire and of Italy as the leading scholar of his generation. He was highly esteemed, too, by the Jews of Germany, especially after the publication of his works.

Possessed of great intellectual powers and many-faceted talents, he combined a religious and mystical ardor with an insatiable intellectual curiosity. Added to these were critical ability, a facile pen, and a boundless capacity for work. He spent most of his active years traveling abroad as an emissary of the communities of Erez Israel for the collection of funds for the upkeep of the academies and scholars. He ended his mission in 1778 in Leghorn, where he spent the rest of his life. Many stories are related of the wonders and miracles he performed. Pilgrimages were made to his tomb at Leghorn until 1960, thereafter in Jerusalem where his remains were re-interred.